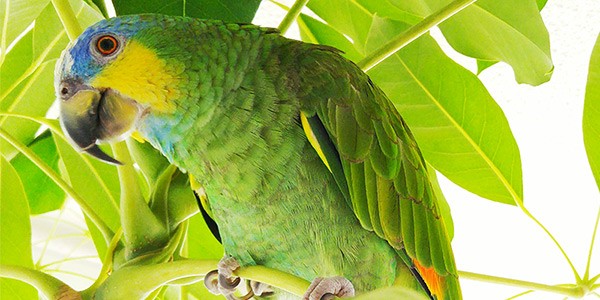 Amazon parrots, as you would expect, are native to the New World. Indeed, Christopher Columbus himself apparently gave the name “Amazon” to the green, short-winged parrots that he brought back to Europe after his first voyage here.

There are 30 species of Amazon parrot, ranging from South America to Mexico and the Caribbean. Some species are common enough that tropical farmers will sadly shoot them as they are seen as pests while others are on the brink of extinction. International trade in all parrot species has been banned to protect local populations, but most parrot species are bred successfully in captivity and several types of Amazons are available from breeders and pet stores in Canada. Prices generally range, depending on the species, from $800 to $2000 with a premium paid for the breeds that are considered to be better “talkers.”

Amazon parrots are very good at talking and imitating sounds—talents rivaled only by the African Grey Parrot. There had been much debate about whether parrots actually were communicating or simply mimicking their owners. Research has clearly shown they are very intelligent and will speak in context. One test subject, Alex can name over 40 objects, say how many objects are in a tray, identify seven different colours, and say whether two objects are the same or different. Studies put the intelligence of these feathered chatterboxes on the same level as three-year-old humans, dolphins, and monkeys. 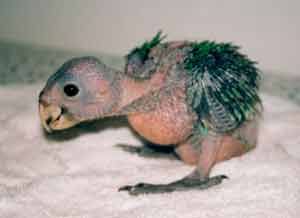 Amazons are actually very similar in personality to monkeys, and both animals lead similar lives back in their rainforest canopies. Amazons are very energetic, playful, social creatures that crave lots of interaction with their human owners. The best pet birds are hand-raised and have bonded early with human companions. More than other parrot species, Amazons are well known for their strong or often moody characters. They can be, at different times, cuddly, loud, quiet, stubborn, silly, jealous, playfully aggressive or irritable. They will play and fight with their toys for hours on end, even rolling over on their backs to juggle a ball or play with some string. Sometimes, however, an Amazon will temporarily become possessive of a toy, or a person, and may become quite aggressive toward anyone who tries to interfere. Careless owners have had fingers or ears bitten, followed by a trip to the hospital for stitches. This is the trickier aspect of owning an Amazon parrot, you really have to understand your bird’s moods and behaviours. Amazon parrots are definitely not for all pet owners, they need much more love and attention than most people would expect. Owning an Amazon is very similar to owning a dog except it has wings.

Personality and talking ability will vary from species to species and from bird to bird. A bird’s ability to speak and perform tricks (or be potty trained) generally reflects the attention and training given by the owners. A bird that doesn’t speak or dance is still a beautiful, intelligent creature that deserves all the love its human friends can give. Amazon parrots would ideally spend 24 hours a day with their owners, and owners should try to give as much time as possible to hanging out with “Polly”. 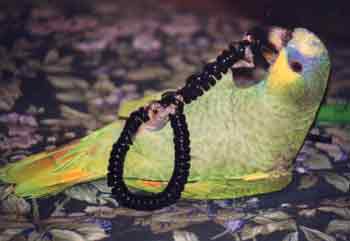 Amazons will roll onto their backs so both feet can get involved in investigating the latest toy.

My experiences with my own parrot, an Orange-Winged Amazon, have been wonderful. Like most Amazons, she loves being around people, and she is particularly good one-on-one with children. She was potty trained from a very early age and will only go in her cage or over a designated bird stand (with newspaper underneath.) She has learned several phrases including “Hello?” (only when she can’t see us), “I’m a Good Girl” (when she wants to be taken out of her cage) and “Can I Have It” (when she wants a piece of food, usually something I’m eating.) Like all Amazons she loves to take showers and she will dance and chatter happily while warm water soaks her feathers. 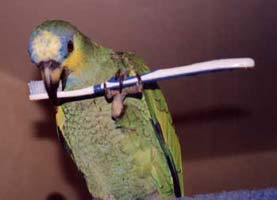 A proper diet is very important for a parrot’s health, and this includes fruits and vegetables, fresh water, a fortified parrot pellet mix, a seed mix as a treat, and a little of what the human family is having for dinner (as long as it is not salty or greasy.) Certain foods are toxic to a bird and are to be avoided: chocolate, caffeine, alcohol, avocado and apple seeds and others. 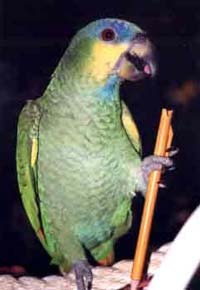 With strong beaks, insatiable curiosity and the instinct to chew up everything they get hold of—watch out!

With lots of love, care and an occasional trip to the vet (where, if truly necessary for the sake of the bird’s own safety, flight feathers can be trimmed), an Amazon parrot will be a beautiful and entertaining companion animal for many, many years. And I mean “many” years: in captivity Amazons generally live 40-60 years, with one amazing bird living to a record 119. If you’re truly ready for a serious long-term commitment and a slightly offbeat adventure in pet ownership, consider the personable, playful Amazon parrot. 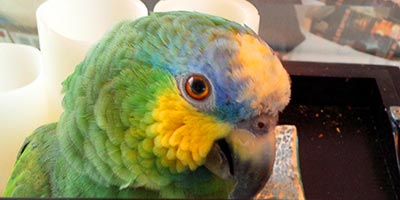 NOTE: It is highly recommended any research done on any pet be conducted over the Internet or in specialist magazines. Consult several current sources and use your judgement in the case of conflicting advice. If you end up bringing a pet into your life, bookmark the better websites so you can stay up-to-date and quickly get answers to the questions that inevitably crop up. 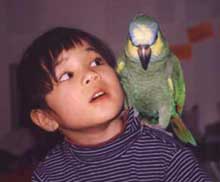