DJ Nasty Naz has spun tracks for music’s A-list…and cooked for them. 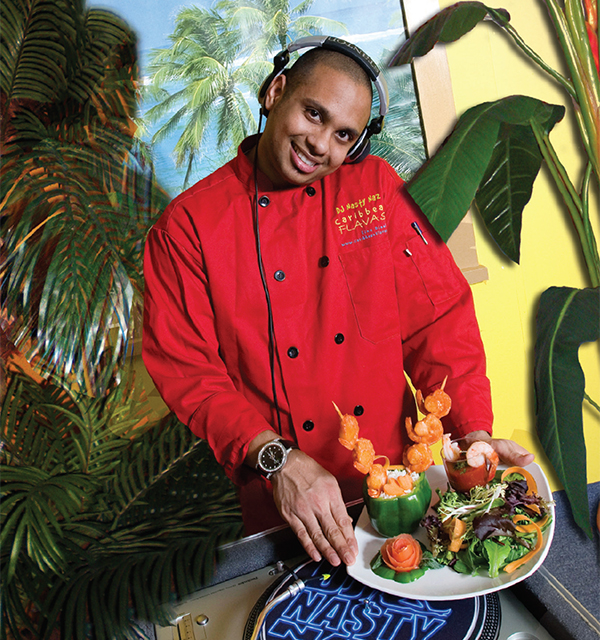 DJ Nasty Naz is one part David Guetta and one part Gordon Ramsay. He’s manned both the kitchen and the deejay booth for stars like P. Diddy, Sean Kingston and Snoop Dogg— sometimes in the same night!

“Sean Kingston, I would cook up his food for him and I’d have my little chef jacket on. When he was done he’d be like, okay, let’s go,” says Naz. “I’d take my jacket off, jump into my deejay gear and start spinning for the show.”

So how does one become a super deejay and hype man, while being a chef to the stars? His journey began as a child growing up in Port of Spain, Trinidad. He started deejaying for local radio stations, until he became big enough to perform in Laurence, Trinidad with Lauryn Hill and the Fugees.

However, he didn’t make a name for himself as a chef until he came to Canada. Despite a booming career as a deejay, Naz came to Fredericton to study business at the University of New Brunswick. “I would just do my cooking in my dorm room. Of course, everyone was like, ‘Man, that smells really good. What are you cooking there? Can I get some?’” says Naz.

But not everyone was in love with his food. As part of a school project, he presented a business plan for a Caribbean restaurant for a predominantly white community like Fredericton. His professors weren’t sold. “They said it was too ethnic for [the area]. They gave me a C+. So I failed the course,” says Naz.

That bad grade nearly got Naz kicked out of Canada, because his scholarship and citizenship were hanging on his performance at school.

But he was determined to succeed in Canada, so he applied for immigrant small business funding through the government. However, Naz says that this was more discouraging than the failing grade on his business plan. “They offered me $300,000 and citizenship… But, what they said was, ‘You people are really good at doing Dolloramas and Quickee Marts.’ I was like ‘Who is you people?’They said ‘No, no, no. We’re not being racist.’ I felt like you can’t say that without it being racist. There’s no backspace button,” says Naz. “That hit me really hard.”

Discouraged, but not defeated, he turned to his family and they helped him open his dream restaurant, Caribbean Flavas, which soon won restaurant of the year in New Brunswick.

Shortly after Caribbean Flavas opened, things began to come together for his chef and deejay co-career—especially after he was invited to perform with Snoop Dogg in Fredericton.

“Snoop says to me, ‘I’m really hungry. This place only has poutine and junk food. I need some good soul food.’ I told him, ‘Actually, you know I just opened a restaurant. He was like, ‘What? Man, let’s do this.’ So I was cooking for Snoop and his 125 person entourage,” says Naz.

His work as a performer and chef got him referred from superstar to superstar. He was soon being ¡ own across the country to cook for everyone from Justin Bieber to Leonard Cohen (pictured here, on the left). 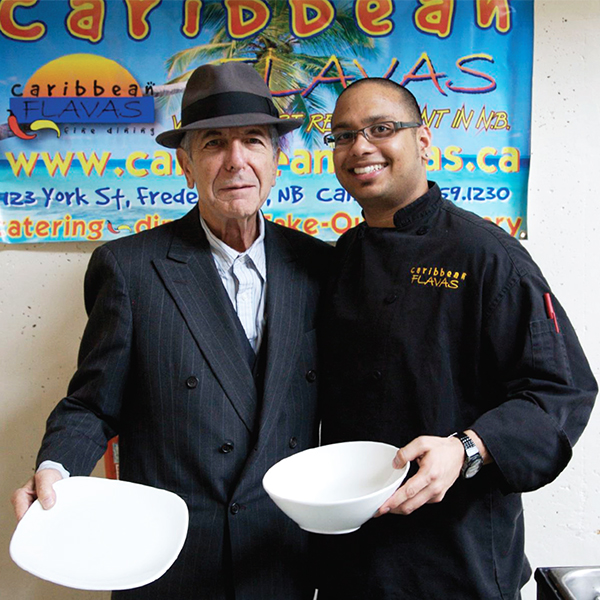 “Let’s say Akon is coming to Canada,he’ll say, ‘Yo Naz, I’m in Canada. Come see me. I need some of your mom’s homemade coconut bread. Come to the show.’ I’ll say, ‘Sure. I’m in New Brunswick, where are you?’ Thinking he’s in Montreal, a few hours away—no, he’s in Winnipeg,” says Naz. “I have to now hop on a plane with eight loaves of coconut bread.”

His work has helped him see the entire world, performing in Saudi Arabia, Paris, New Zealand, Australia (for over 300,000 people) and the UK.

Despite having two wildly successful careers, Naz says he wasn’t convinced he was a success until he spoke to music legend Russell Simmons. “I said, ‘Russ, how do you determine success? I’m doing a lot of things, but I don’t really know if I’m making that mark or being successful.’ He [told me that] if you find a job that you love, you’ll never have to work a day in your life,” says Naz. “He said, ‘You’re successful in my eyes.’”

Those words meant a lot to Naz and he now greets each day as a blessing. He enjoys every moment, whether it’s being on the red carpet in Miami or busing tables back at the restaurant.

When asked about his future, Naz talks about touring with Christina Aguilera and working with kids in the same sentence and with the same amount of excitement. He’s twice-blessed and he knows it. “What isn’t in my future?” jokes Naz. 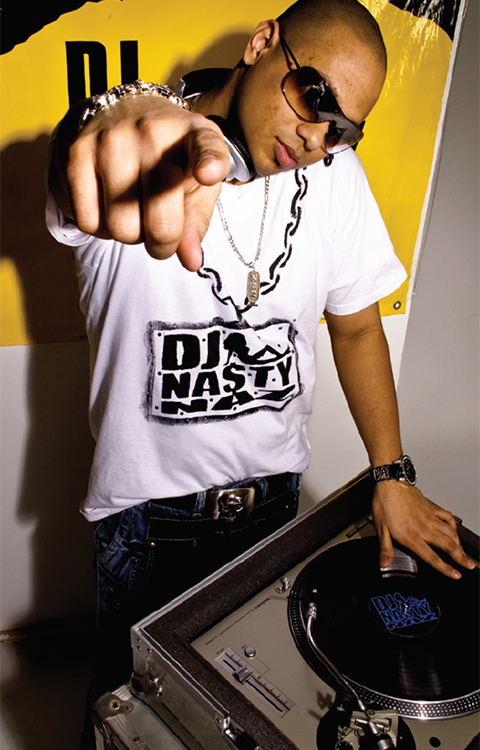