With her ground-breaking research at the Sloth Sanctuary of Costa Rica, the host of Discovery Channel’s Meet the Sloths aims to shed light on the misunderstood (and much-maligned) smiling sweethearts. 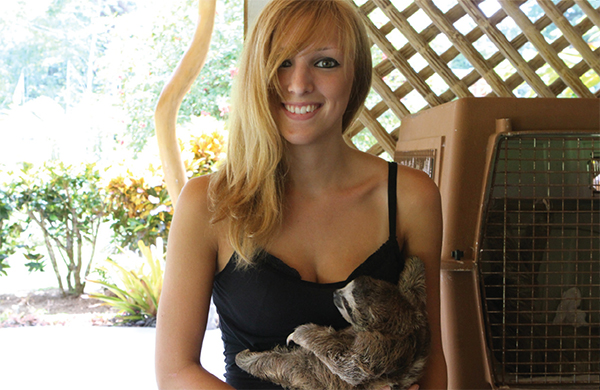 As a young child, Becky Cliffe shunned the TV set in favour of being outside, collecting assorted creepy crawlies for what she called her “bug boxes.” Today, she’s featured on the Discovery Channel’s Meet the Sloths, where she’s seen exploring the Costa Rican forest, tracking the fascinating and elusive wild sloth, an animal about which very little is known.

The show, and Becky’s ground-breaking research, have stoked the public’s interest in sloths and drawn some much needed attention to their plight. “They’ve become quite popular because they’re
so cute and they’ve always got that smile,” Becky says. “You can’t not fall in love with that face!”

After graduating with first class honours in Zoology from the University of Manchester, Becky was selected for a one-year research placement at the Sloth Sanctuary of Costa Rica to learn and work alongside the sanctuary’s founder, Judy Avey-Arroyo. Judy started the sanctuary accidentally over 20 years ago when she decided to foster and raise Buttercup, a favourite of the sanctuary’s visitors and the one who’s featured regularly on Meet the Sloths. When she first arrived, Becky soon realized how little was known about sloths. Even their life expectancy remains a mystery.

Observing the sloth up close quickly proved to Becky that the little that was known about sloths was the stuff of myth and legend. Named after one of the Seven Deadly Sins, sloths often face physical abuse at the hands of superstitious locals. “All their problems come from humans,” Becky concedes.

They’re poached for the pet trade, including some American states where it’s legal to own a pet sloth. “They’re sold in pet shops, which is really sad. They’re all taken from the wild,” Becky says. “If it’s
a baby for sale, then its mother will have been killed to get that baby.” 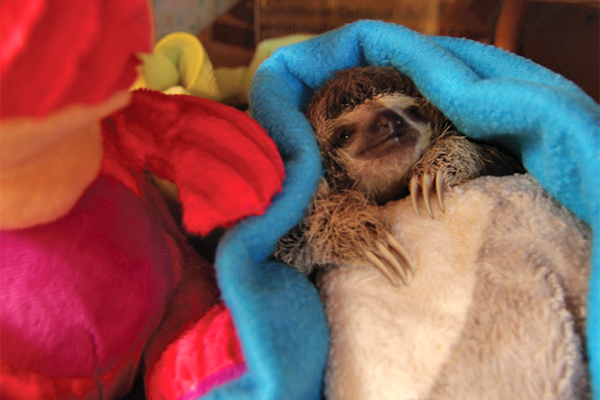 Another problem is human encroachment on the sloth’s habitat. Sloths are creatures of habit: if a road is paved through their habitat, the sloth will cross that road. If power lines are put up, sloths will use them as “hangways” to get from one location to another. As a result, the sanctuary often tends to sloths that have been run over or electrocuted. “Something needs to be done to make life easier for wild sloths and help them adapt,” she says. “That’s what the sanctuary is working towards.”

Despite those dangers, Becky delights in the day-to-day routine at the sanctuary — although “routine” may be inaccurate. After all, how many people can say they’re woken up by the cries of wild
howler monkeys?

“You wake up with a plan in mind but then none of it happens,” she chuckles. There are over 140 sloths at the sanctuary at any given time. Injured sloths need help with feeding and grooming; the orphaned babies need their climbing practice; emergencies that are called in at all hours of the day or night need immediate response from the team. Now studying for her PhD in Zoology, Becky has initiated the Sloth Backpack Project, which outfits wild sloths with tracking devices, so she spends a good part of the day tracking her sloths. Becky hopes that by learning more about their behaviour in the wild, the sanctuary’s hand-reared sloths can one day safely be returned to their natural habitat.

She also remains enchanted by their antics and is unapologetic that Meet the Sloths capitalizes on the sloth’s considerable offbeat cuteness. “We feel it’s important to play on the cute factor because it gets people involved in the sloths and raises awareness,” she says. “It gives us a chance to teach people about the conservation message. That draws people in. It gets people engaged.”

Although studying the sloth wasn’t something Becky thought she would be doing with her future, she’s thrilled that her life’s path led her to Costa Rica. “I have my dream job now,” she gushes. “I never
knew what I wanted to be, but I do now. I found where I’m needed and what needs to be done, and I’m in a position to do it. So I’m really lucky!”

Becky has some sound words of advice and encouragement for those who are still deciding upon a future career. “You need to get out of your comfort zone. If you have a passion for something, make it happen. Get off your sofa and get out into the world,” she adds. “That’s where magic happens!” 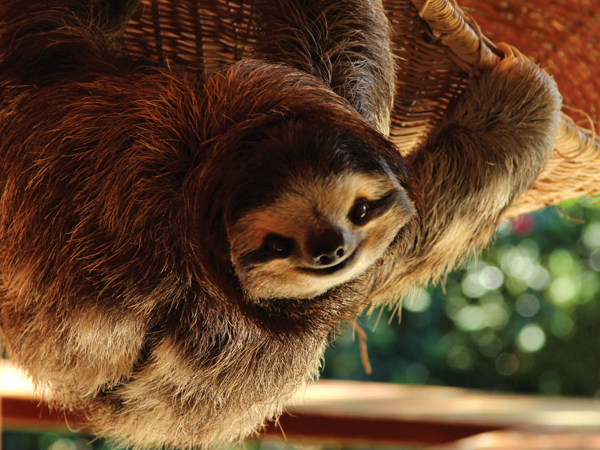 Here’s how to get started!

1) Nurture your passion for the natural world around you. Becky had her “bug boxes.” What do you have?

2) Make and take the time to learn more about what interests you. Read books. Volunteer at an animal shelter. Visit a local science centre. Ask questions. Join clubs and if there’s no club to join, start one!

3) Share your newfound knowledge in a blog or article for the school newspaper.

4) Be flexible and open to alternate paths in your life. There are countless study and career options, as well as internships, scholarships or, like Becky, chances to travel and research.