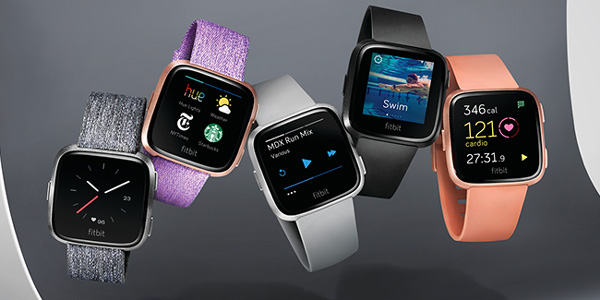 We’ve been using fitness trackers and smartwatches for many years, and have tried many brands and models. The Fitbit Versa is our favourite of all.

San Francisco-based Fitbit has been in the wearable fitness tracker business for over a decade and we’ve enjoyed watching their steady product evolution. The most exciting addition to the 2018 lineup has been the Fitbit Versa smartwatch.

Light-weight, modern design and a refreshing variety  of looks

The Fitbit Versa is billed as the lightest metal smartwatch on the market. Anyone transitioning from a fitness tracking band, such as the Fitbit Charge 2, will be pleasantly surprised how light and comfortable the Versa sits on your wrist. It’s the slimmest smartwatch we’ve seen and it’s actually slimmer and lighter than the Fitbit Charge models. For those of you who wear your device 24 hours a day (who doesn’t love sleep tracking?), you’ll be happy to hear that we barely sensed we were wearing the Versa.

The design and lines of the watch unit are quite modern and aesthetically pleasing, whether viewed at a distance or up close. The anodized aluminum case and rounded, square display both suggest solid, quality materials and workmanship despite the light weight and feel of the watch.

The responsive touchscreen is great, it’s bright and vivid, and also has a built-in light sensor that dims your screen to match the ambient light. The display’s menu system is intuitive and easy to use, and three side buttons add to your ability to control the “smarter” functions of the watch.

In addition to a handful of colours for the metal watch casing (black, silver, graphite, rose gold) the Versa offers a truly impressive collection of bands (see image below), and is teaming up with additional designers, such as PH5, to add even more styles to the mix. 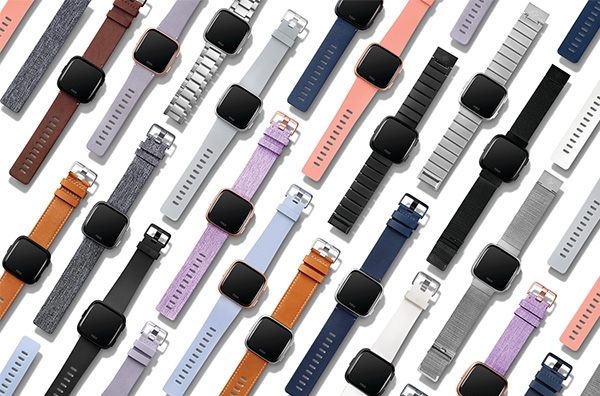 Looks great but what does it do?

Fitbit devices are wearable fitness trackers and even when they crossover into the smartwatch space the fitness features of the Fitbit are front and centre. Everything you loved about your last Fitbit device, or another product will be there waiting for you in the Versa, and a whole lot more.

Here’s a list of the fitness and wellness features of the Versa:

With that list it’s as good as any fitness tracker out there but the Fitbit Versa also has an advanced array of smartwatch features that you’ll love.

With the Versa smartwatch you get:

Easy to setup, use and recharge

Our Fitbit Versa charged up quickly and setup was a breeze on our Android smartphone (in our case it already had the Fitbit app from use with a previous Fitbit device). The change from one device to the other was seamless, and data from the new device synced immediately with the app. Using the Fitbit app on your phone you can change more settings, and can access numerous watch face “skins” from Fitbit and third party designers to really make the Versa your own.

We often hear owners of other smartwatches complain about battery life, as no-one wants to be charging a smartwatch daily or even every other day, especially when we are trying to wear it 24 hours a day. Fortunately, as with other Fitbit products, the Versa battery life is impressive, lasting four or more days on a single charge. 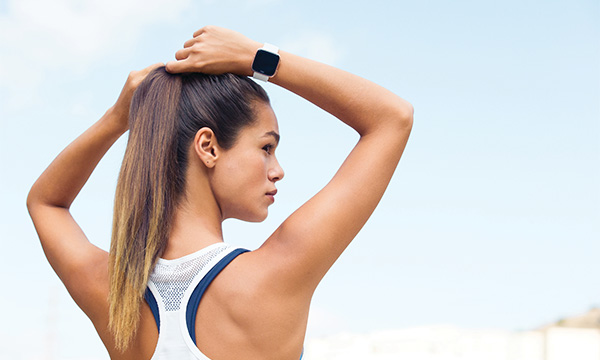 If you’re looking to upgrade to a slick, stylish smartwatch with every great feature you’ve come to expect from Fitbit and more, you will be more than pleased with the Fitbit Versa. It is easily our top pick for fitness tracking device in 2018. 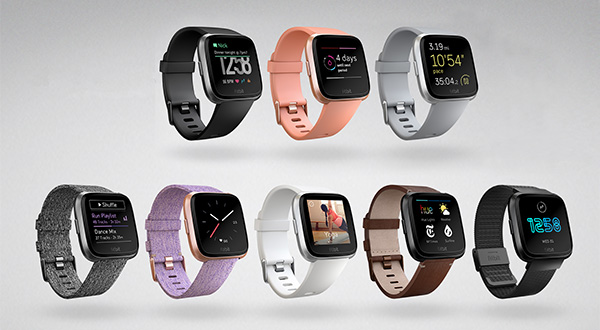