You’re in a toy store and suddenly 50 people simultaneously begin jumping around like frogs, and as quickly as they had begun, they abruptly stop and leave. Not a word. Not an explanation. You have just experienced a flash mob. 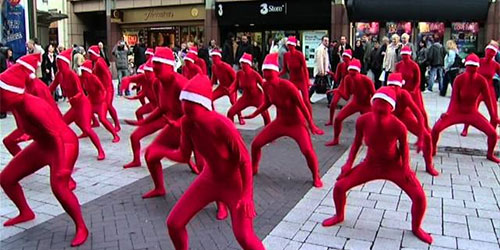 In case you haven’t heard, flash mobs are the latest trend involving dozens of people getting together and performing wacky, harmless stunts throughout a city in the name of good, clean fun. According to CNN, the first flash mob was created by a man named Bill on June 17th, 2003 in New York.

Now it seems most of the world is joining in, including several Canadian cities. Toronto’s premiere flash mob involved the frog scene described above, and after striking the toy store, the thrill seekers headed off to a local fitness centre and proceeded to do jumping jacks before dispersing and heading their separate ways.

On August 9, 2003, in Montreal, a large group did some spontaneous quacking at the Place des Arts for 25 minutes, and then collectively tossed plastic duckies into the fountain.

On August 21, 2003, Vancouver experienced its first mob, which was organized by a business owner named Ingrid. 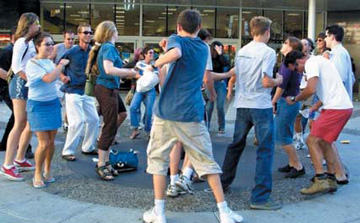 A lot of thought is put into the flash mobs, which involve strategic planning, timing, and the need for participants to follow instructions exactly. Approximately two weeks before the event, Ingrid put her plan in motion by using Yahoo to find other people interested in some harmless entertainment. She listed the group on various other mob related sites and posted it on other group discussion boards.

By the day of the mob there were almost 100 people involved. Via e-mail, they were given very specific instructions. Each person was to go to a pre-determined meeting spot to receive instructions from a “mob rep.” They were then told when and where to meet, and the nature of the mob. At exactly 5:43pm the mob gathered at a specified corner in downtown Vancouver and began to do the Twist while half of the group yelled “Chubby” and the other half replied with “Checker.” Two minutes later, at precisely 5:45pm it was over.

“I think it’s mostly dependent on new technology,” says Ingrid about flash mobs. “It’s based on viral marketing. I send an e-mail to someone in the group, they forward it to six friends, and their friends forward it, and so on.”

Everything is planned through electronic media, such as text messaging, chat rooms, and e-mail. Once again, technology helps to usher in a whole new world of real time interaction.

4 simple steps to properly participate in a flash mob: