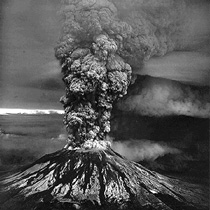 Mother Earth seemed to be celebrating the year 2000 with a significant increase in volcanic activity. The last six months have seen at least 23 volcanic eruptions (major and minor) with ten incidents in the month of Feb 12-Mar 12 alone. That is ten times the normal average of about one eruption a month.

There seems to be no pattern as countries as far apart as Russia, The Philippines, Ecuador, Iceland and the island nation of Montserrat in the Caribbean have all seen native volcanoes join in the festivities.

Fortunately the volcanoes generally have given advance warning and so far there have been no lives lost. 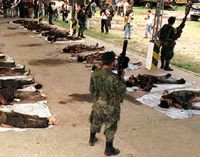 Despite new calls for peace, violence raged this spring as government forces and two rival guerrilla groups battled each other. The guerrillas control approximately 40% of the countryside. They are staying well-financed thanks to payments received for protecting the billion dollar Colombian drug industry.

With over 250,000 murders in the last decade and kidnappings becoming more common by the week, many Colombians are choosing to leave the country permanently.

The political violence goes back almost 100 years but the drug boom of the 1980’s gave greater financial power (and more weapons) to the guerrilla fighters. 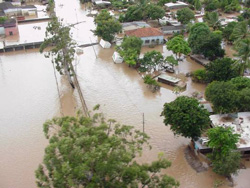 This year’s rainy season in southern Africa was one of the worst in a century with the coastal country of Mozambique taking the worst of it. Heavy inland rains combined with typhoon rains coming in from the Indian Ocean to produce flooding on a biblical scale.

Floodwaters rose up to 30 feet high in some areas forcing over a million Mozambicans to flee their homes. Disease and severe shortages of food and clean drinking water will be the next crises as the floodwaters recede. 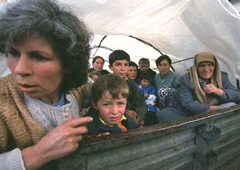 A year after the American led bombing of Serbs in Kosovo, ethnic tensions are as high as ever.

The majority of Albanians (that Western forces went in to protect) are now being accused of their own “ethnic cleansing” of the Serb minority through murders, rapes and forced evacuations.

In the last year, more than two-thirds of Kosovo’s 300,000 Serbs have fled, many families leaving villages they have inhabited for up to 1000 years.

NATO and UN diplomats are warning Albanian leaders that international support for them will erode if the revenge attacks do not cease. NATO continues to patrol the province, accused by Serbs or not offering them enough safety, and by Albanians of offering Serbs too much protection. 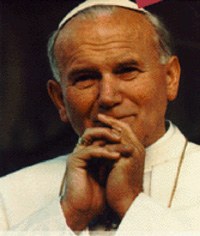 Pope John Paul II took an unprecedented seven-day tour of religious sites in Jordan, Israel and Palestine. The frail 80-year old leader of the world’s one billion Catholics is the first pope to visit the Holy Land. His trip included strong apologies for the sins committed by Christianity against the Jewish people and calls for peace between the Israeli and Palestinian nations.

A couple weeks before his visit the Pope released a broad 19,000 word apology entitled “Memory and Reconciliation: The Church and the Faults of the Past” which addressed mistreatment of Jews, women and native peoples. While some feel the apologies have not been specific enough, most observers see them as important steps towards invigorating the image of the Catholic Church heading into the next millennium.

China continues to threaten to invade the island state of Taiwan if its newly elected President, Chen Shui-bian, attempts to move towards formal independence, as he had suggested in the past.

The aging Communist leaders in China consider Taiwan to be a renegade province and have always made it clear that Taiwan would never be allowed to separate. The new Taiwanese president, for his part, is looking to avoid confrontation and is already saying he is not interested in independence and wishes to promote better relations with mainland China.

While China’s military is massive in terms of sheer numbers, an invasion would be very difficult as the Taiwan defenders have significant technological advantages and the quiet backing of the United States.