The threat of terrorism has lead to greater security for the upcoming 2002 Winter Olympics Games in Salt Lake City, Utah. Originally the source of a bribery scandal to sway Olympic Committee members, the focus has now shifted to preventing terrorist attacks. At the last games held in the U.S., Atlanta 1996, a bomb attack killed one person and injured 100 more. An estimated 3,500 athletes and officials from about 80 countries will attend the latest edition of the world’s largest sporting event to be held February 8-24.

In the wake of the terrorist attacks on the World Trade Center and the Pentagon, the American airline industry struggles to deal with massive financial losses. The airlines are faced with lower ticket sales due to a depressed economy and a public much less enthusiastic about flying in jetliners for business or vacation. Higher costs due to increased security measures are also hurting business. Airlines have slashed jobs by the thousands and a few, such a Chicago-based Midway Airlines have gone out of business.

This has been a year of well-publicized shark attacks up and down the southeast coast of America. Dozens of attacks, some deadly, drew worldwide attention to the dangers of swimming in waters shared by the razor-toothed fish. Experts are saying it’s not an unusual year for such attacks, and claim the world population of sharks is actually declining due to over-fishing. PETA, an animal rights group, tried to bring attention to the fact that humans killed an estimated 50 million sharks this year for food and sport.

The World Conference Against Racism was held in the South African surfing town of Durban. Much of the world was disappointed when the United States (along with Israel) pulled out and boycotted the conference. They withdrew due to demands by Arab nations that Israel be criticized for “racist policies” against the Palestinians. In pulling out, the Americans also avoided involvement in the debate on giving heavy financial rewards to the ancestors of black slaves and the African nations that supplied them.

Overshadowed by the American “war on terrorism”, Macedonia is still struggling with its own internal conflict. The Albanian Muslim minority has been rebelling against the Christian Macedonian majority for the last year. Western NATO troops have been stationed in the country to try to defuse the situation by collecting arms from the Albanian guerrillas and helping to negotiate more political power for the ethnic-Albanians the rebels represent. The Macedonians claim the rebels have far more weapons than they admit.

Chinese authorities have stepped up their censorship of the Internet, targeting Internet cafés and bars that are especially popular with teenagers. Thousands have been shut down and others have been outfitted with software that allows local police to monitor which sites are being accessed. Chinese authorities already censor many foreign media organizations and websites, prohibiting pornography, violence, “superstition” (religion) and anything that is even mildly critical of the Communist party and their policies.

A QUICK LOOK AT AFGHANISTAN AND THE TALIBAN

It’s a desolate, mountainous country surrounded by Russia, Iran and Pakistan. With little direct contact with the Western world, Afghanis have spent the last few decades fighting internal wars and revolutions. Battled hardened and strong in their Islamic faith, entire generations have known nothing but conflict. A shaky Communist revolution in 1979 led to a Russian invasion. The next decade saw the Soviet superpower humiliated by unrelenting Afghan guerrilla warriors known as the Mujahideen. Many foreign Muslims came to fight alongside them: most notable was the 22-year old son of one of Saudi Arabia’s richest families, Osama Bin Laden. The U.S. also funneled billions of dollars to help the Mujahideen warriors. The Russians retreated in 1989 but the cost of victory was high: over a million Afghanis had been killed and millions more had fled the nation. 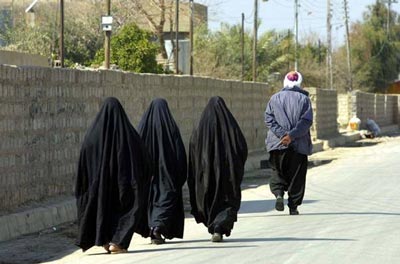 In the early 1990s, rival Mujahideen groups battled each other, leaving the country in a lawless state, ready for a new revolution. Enter the Taliban. A movement of Afghanis trained in Pakistani religious schools joined forces with some of the Mujahideen warriors to protect a key trade route from bandits. A greater campaign to bring law and order to the land followed. Many of the 24 millions Afghanis were initially glad to see an end to corruption and crime, and support for the Taliban’s revolution grew. As they quickly took control of nearly the entire country, they imposed very harsh Islamic laws. Western influences such as T.V., Internet and music have all been banned.

Left to their own, the Taliban probably would have been content to establish and run their strict Islamic state in isolation and relative peace. Unfortunately, they have embraced and have been influenced by more violent, radical factions of Muslim warriors like bin Laden. Historically, the Taliban and their troops are intertwined far too tightly with these groups to completely cut ties. It will be a long and difficult affair to eliminate the threat of terrorism that the Taliban poses to the outside world.