LG celebrates the holiday season, sharing a slew of new products that will figure high on many a gift list come December. 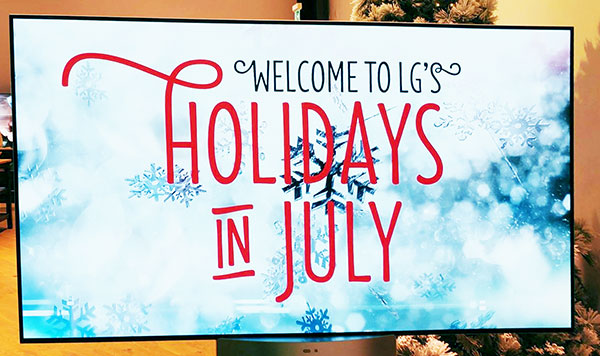 Christmas in July? It’s a time-honoured tradition in the Toronto media world that goes back as far as we can remember (and that’s back to about 2000 when Faze began). PR agencies, brands, retailers such as Canadian Tire and Indigo have all been reminding us journalists mid-summer that, even while we may still be working on last week’s assignments, they are already thinking two seasons ahead. LG Canada, admittedly one of our favourite brands for many years, has decided to get in on the game. We have loved their multi-year Toronto Fashion Week sponsorship, super-charismatic marketing leaders, casual Korean corporate culture (take that lovers of alliteration), and really well-designed products.

The showcase featured a wide range of products for the home, ranging from computer displays and televisions, to cell phones and tablets, and a wide selection of major home appliances.

In addition to feasting on LG’s tech offerings, we admittedly sampled a delicious mulled-wine flavoured holiday cocktail that was on offer, aka “getting into the holiday spirit”. 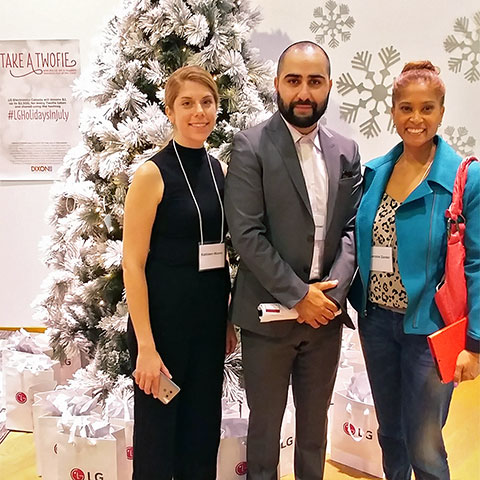 Our guide for the afternoon, Kathleen Munro and uber-knowledgeable LG guru Ash Molaei full of holiday joy posing by the Christmas tree.

We began with a couple stunning top of the line 4K computer displays that would mightily compliment any desk, kitchen or gaming setup. We’re usually fans of dual monitor setups but these two, crystal clear, slick designs had enough real estate to keep us very happy when a single monitor made sense, and even better, these can be virtually split in two for all the productivity benefits of two screens. 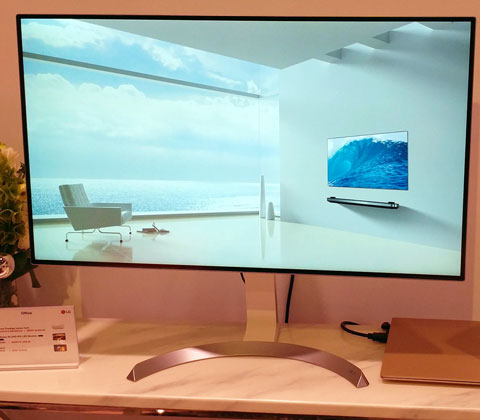 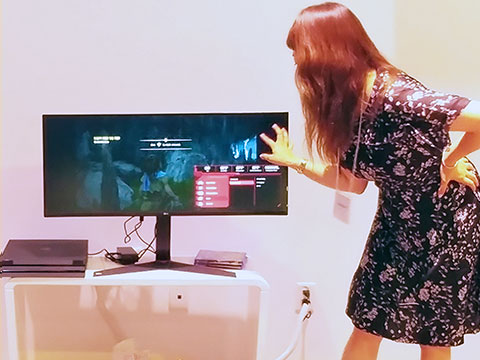 The home entertainment setups really had us wide-eyed, because, even though we’ve seen much of it before, our current home setups are still good ol’ 1080p and even older 5.1 audio technology (not complaining), so the difference on the 4K screens and 2017 sound systems really jump out. May be time to upgrade soon! The super thin OLEDs amazing engineering feats, and even the massive 80″-plus screens were thinner than our phones.

On the audio side of home theatre, the LG high resolution sound bar with Dolby Atmos (an award winner at CES 2017) was shown off in a special listening room, and it was impressive technology, coming the closest yet to making the conventional five (or more) speaker surround sound setup unnecessary, at least in the right room. 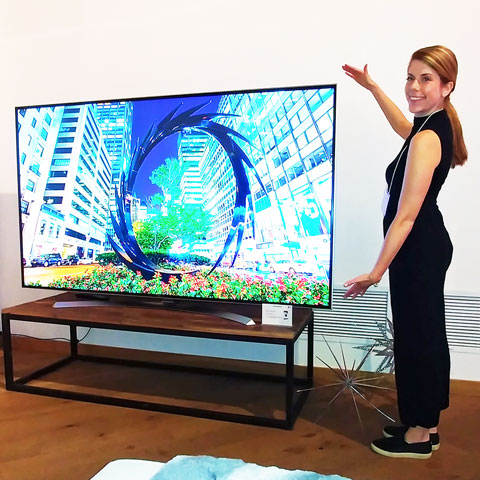 As beautiful visually as any OLED we’ve seen and of course razor thin.

With the office containing some talented souls in both baking and cooking, the two ultra-modern kitchen setups were more appealing to us than one might assume. The ovens, microwaves, dish washers and refrigerators all had modern new features and designs that we one day hope to call our own. Notably, the new fridge with the window (lit when knocked) lets you contemplate what contents to snack on without opening the fridge. 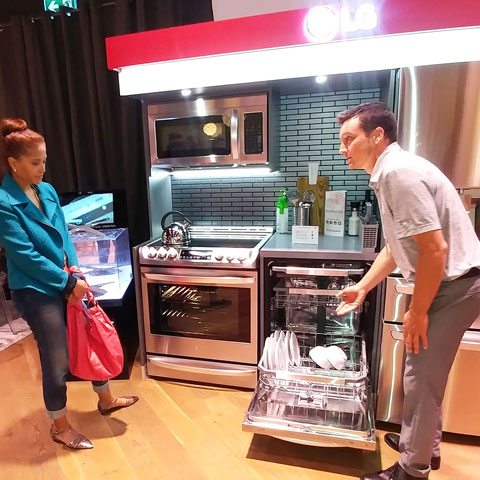 Does the good looking guy to load and empty dishes come with the dishwasher as well? 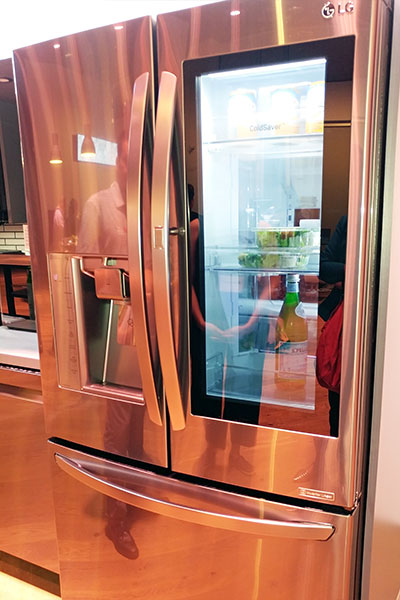 The LG Styler created the biggest buzz on the entire tour, for both the ladies and guys present. Billed as a “steam clothing care system”, it “refreshes”, clothes in a little as 20 minutes, as well as steaming away wrinkles. Think suits, slacks, shirts, blouses, and it even has a special area for shoes! 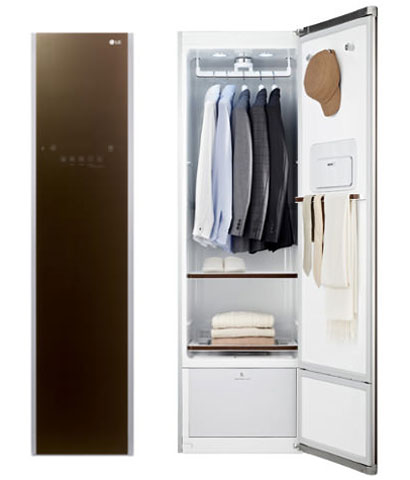 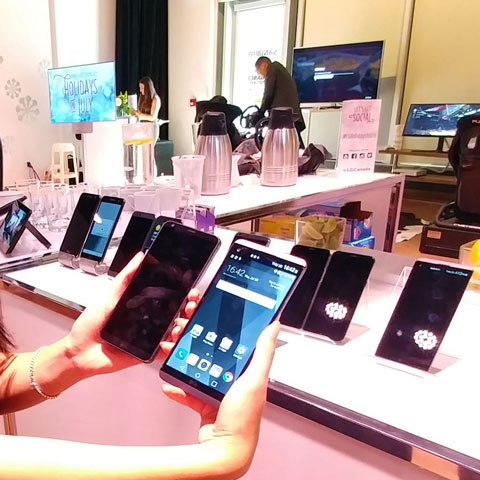 Surprisingly, it was the first time we’d held and operated the new LG G6 that came out in the spring, as well as the bigger overall LG V20. We’re big LG G5 fans at Faze and hadn’t really felt the need to upgrade to the G6, but we’re wavering now, given the slightly larger (or we should say vertically higher) 16:10 ratio display and the fact that the G6 is reasonably water resistant. The V20 is another fine top of the line phone, but we’re partial to the models that fit more comfortably in one hand. Checking out the new phones we completely overlooked the tablets.

After sipping the last of our holiday cocktails, we settled into the cockpits of our high-powered race cars with help from Roger, and spent ten minutes crashing into things, not intentionally we’ll point out. Lesson learned, do not drink and drive, even just one little tasty one. The virtual race setup was awesome, and the ultra high definition display made the experience very realistic and fun even if we were miserable novice drivers. May have to work extra hard and get one of these for my future mansion one day. 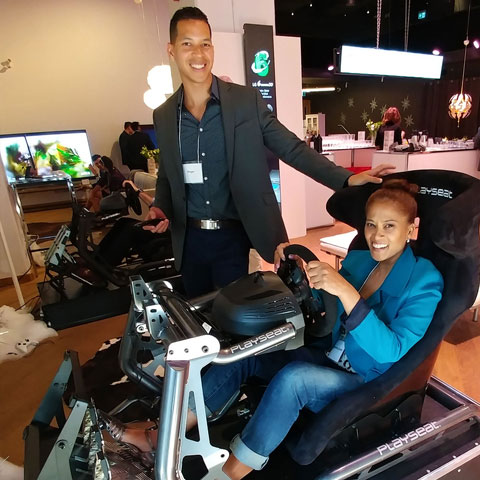 We even had special gift bags on the way out, with the highlight being a LG Tone Ultra wireless headset, another accessory we’ve been intrigued by but have yet to have had a chance to review, so stay tuned.

At any rate, out the door we were back into a glorious hot, humid Toronto July afternoon, and immediately began the search for a nice patio and sangrias.