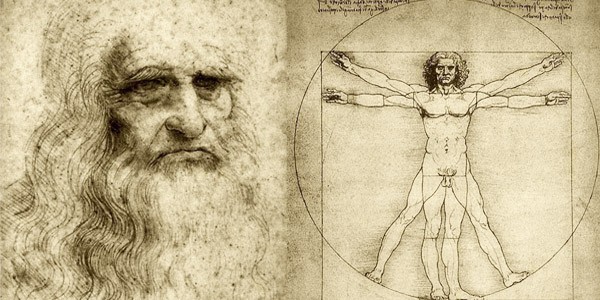 She’s one of the world’s most famous paintings, protected behind bulletproof glass in the Louvre Museum in Paris. And she’s fooled everyone for 500 years. Why is the Mona Lisa smiling? It’s a question that observers have asked for centuries. As enduring and mysterious as the Mona Lisa, so is her enigmatic artist, Leonardo da Vinci. 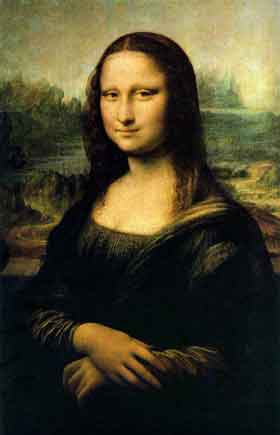 Leonardo’s life spanned the mid 15th and early 16th centuries, a period known as the Renaissance. During this time, artistic, social, scientific and political thought shifted from the ignorance and superstition of the Middle Ages to embrace reason, science, learning and tolerance.

Born in Italy on April 15, 1452 in the small mountain town of Vinci (Leonardo da Vinci = Leonardo of Vinci), Leonardo was the son of a lawyer and a peasant girl. He grew up exposed to a tradition of painting. Legend has it that when Leonardo was young, his father asked him to paint a picture of a shield. Leonardo thought it would be much more interesting to paint a monster. He collected lizards, bats and other dead animals and tried to replicate them to create his masterpiece. He didn’t even notice that the animals were rotting as he painted. When his father saw the painting, he was impressed by its realism and knew that Leonardo must be an artist. 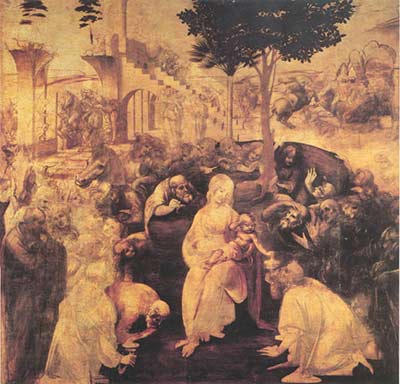 When Leonardo was 15, he began an apprenticeship with a renowned workshop artist, Andrea del Verrocchio, in Florence. Throughout his life, Leonardo would use close observation to understand the world around him. In his art, Leonardo applied his observations on nature to paint realistic-looking pictures. Unlike many other artists of his time, he did not paint overemphasized muscular bodies. He was the first artist to study the physical proportions of the human body and use his studies to paint lifelike people. His style eventually became the standard for much of the art produced in the 16th century.

Leonardo also experimented with light and shadow in his artwork to recreate the 3-dimensional form of objects. His paintings were among the first to show changes in the detail and colour of an object to create an illusion of depth and distance. His most famous artworks include The Baptism of Christ, The Mona Lisa, The Last Supper and The Adoration of The Magi.

An important aspect of Leonardo’s work as an artist was his ability to combine art and science. He used his knowledge of anatomy and his observations of how objects moved and appeared naturally to complement his art. Since the 19th century, Western culture has considered art and science as separate schools of thought. Many consider Leonardo’s work to symbolize the former state of unity between the two disciplines.

During the later years of his life, Leonardo was more fascinated by science than he was by art. Leonardo was not limited by the technology of his time. He studied and thought of ideas that were possible or conceivable. One of his greatest accomplishments is the range of topics that he studied including anatomy, zoology, botany, geology, optics, aerodynamics and hydrodynamics. His interests were so broad that he often became interested in something else and failed to finish what he started. Even still, Leonardo was so far ahead of his time that many of his ideas would not be further explored or even understood for another 300 to 400 years. Leonardo observed, analyzed and recorded everything he saw in meticulously illustrated notebooks. Despite producing thousands of pages of observations in his manuscripts, Leonardo never published his ideas. He even went to great lengths to conceal his work by writing in cryptic shorthand or writing backwards. 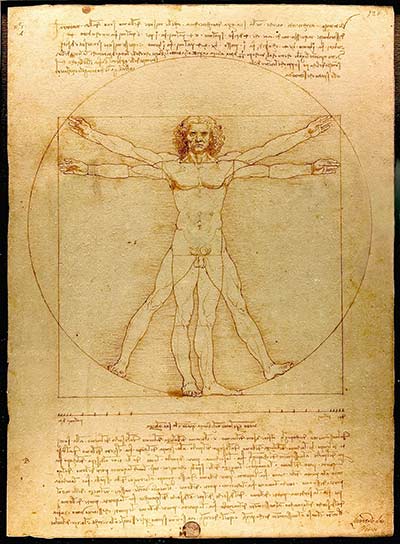 Notes on the famous Vitruvian Man are in mirror writing

Some of his scientific notebooks still exist today. The most famous, Codex Leicester, was written on double-wide pages in his mirror writing or backward script. The Codex contains observations of the natural world detailed by text, images and diagrams, and is named for Thomas Coke, the Earl of Leicester, who bought it in 1717 and whose family owned it for 263 years. In 1980, the book was purchased by Armand Hammer, who re-named it the Codex Hammer. On November 11, 1994 the manuscript was purchased by Bill Gates at Christie’s auction house for a staggering and record-breaking sale price of $30,802,500 (U.S.). The name Codex Leicester was restored in July 1995. 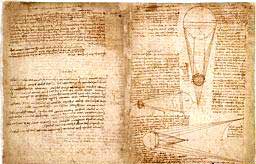 Unlike casual observers, Leonardo mentally dissected his experiences and recorded each action and occurrence. He immersed himself in nature and asked himself questions about what he saw. While contemplating the answer, he painstakingly recorded each detail of the solution, constantly applying his techniques of observation and analysis. Leonardo’s fascination with learning led him to undertake some creepy investigations. For example, it’s recorded that Leonardo, in his quest for knowledge, would use the bodies of criminals who had died, to examine and draw the limbs, nerves and joints of the human body.

To earn extra money, Leonardo put his drawing skills to work sketching inventions. (Even in the Renaissance, artists had a hard time earning a living.) Although it wasn’t hard to find somebody to repair a machine, it was something extraordinary to find somebody to invent one. His talents in art allowed him to draw his designs clearly. Many of his drawings are considered the initial blueprints for machines that exist today. Again, Leonardo used his method of close observation to study how machines work. He understood their design and structure and was able to improve existing machines and create new ones. Leonardo designed several flying machines, including a helicopter. These machines were impractical, but study of his designs shows that they were composed of sound aerodynamic principles. 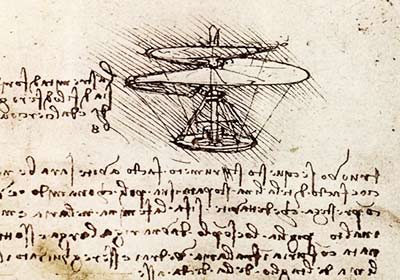 Da Vinci’s Helicopter was drawn in 1493, 450 years earlier than an actual helicopter would take to the air

At the age of 67, Leonardo died in 1519 in the arms of that common killer: old age. Leonardo’s legacy of inspiration and ideas remain strong. He embodied the spirit of the Renaissance through his intellectual pursuits and desire to use his talents for the good of society. His diverse knowledge and many contributions make him a leading example of a “Renaissance Man.”