A civil war has broken out in the kingdom of Goredd and Seraphina must travel to the outlying countries to recruit half-dragons to help restore the peace. But along the way she meets an unexpected and dangerous enemy: a fellow half-dragon who possesses mind control powers. 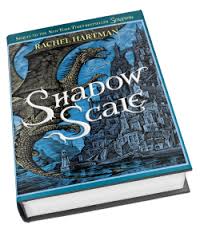 Shadow Scale is the highly anticipated sequel to Rachel Hartman’s debut novel, Seraphina. But with Seraphina absolutely sparkling (you can read Faze’s review and Q&A with Rachel Hartman here) Shadow Scale is a tad dull in comparison. It could be the slower pace, the overwhelming amount of new characters, or the clichéd deus ex machina ending, but Shadow Scale doesn’t quite deliver the same magic of its predecessor.

Bad Romance: The stunning romance that kept us captivated in Seraphina fell flat in Shadow Scale. We won’t spoil the ending but let’s just say it left us way unsatisfied.

Amazing World: Rachel Hartman did a great job building the world of Goredd in Seraphina. Fortunately, the surrounding countries of Goredd that we are introduced to in Shadow Scale are built just as beautifully.

The verdict? It’s tough to resist jumping right into the sequel of a excellent novel, but you may want to savour Seraphina for a while before you move on to Shadow Scale.