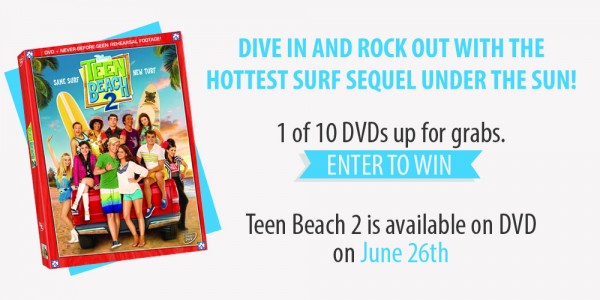 Now that summer ‘s over and school has begun, Brady (Ross Lynch) and Mack’s (Maia Mitchell) relationship seems headed for a wipeout – until Lela, Tanner and the “Wet Side Story” kids show up! Dazzled by the novelty and variety of the modern world, Lela wants to stay, but the real world and the “reel” world just don’t mix. Can Mack and Brady find the magic to get the kids home and get their own romance back on track before it’s too late? Packed with electrifying song & dance numbers and hilarious fish-out-of-water wackiness, Teen Beach 2 is “wow-abunga” fun for everyone.

BONUS: Chrissie Fit dishes on her character Cheechee, her favourite dance number from the sequel and advice for aspiring actors in an exclusive interview with Faze. Check it out!

CONTEST RULES: No purchase necessary. Contest entry deadline is Tuesday, July 3, 2015, midnight EST. Number of entries limited to one entry per person/email address per hour. Competition open to residents of Canada excluding residents of Quebec. Entrants must be at least 13 years of age (or older if required by the laws of the province or state in which you reside.) Ineligible entrants include all employees of Faze Media Group companies, Warner Bros, their families, agents or anyone professionally associated with the administration of this promotion. Completed entries will be entered into a random draw for ten (10) prize winners. Chances of winning depend upon the total number of entries. Prize winners will be notified within 2 business days of closing date of the contest. Any unclaimed prizes will be forfeited after one month of the closing date. There is no substitution available and no cash alternative. The prize for the competition has a suggested retail value of $40. Items may not be exactly as shown or described.