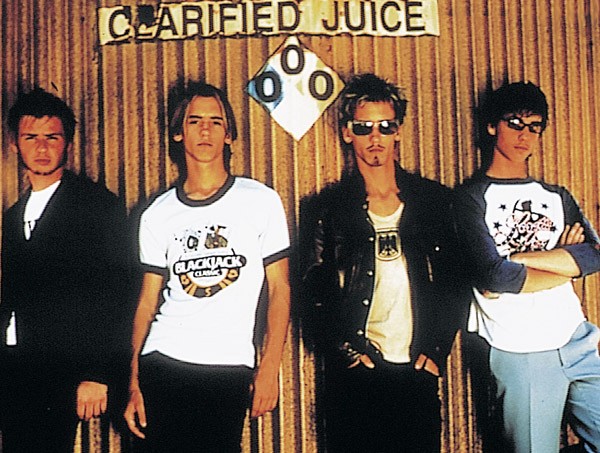 Evolution. It’s an unavoidable force that affects us in so many ways. We’re all hit by change, yet it’s usually quite subtle – a ripple effect. The Moffatts are almost like poster children for change. The whole reason you see them in a different light is because they are in a new light – their light.

I’m sure you’ve seen them; the four brothers that crank out the pop/rock tunes. With guidance from mega-producer Bob Rock, the Moffatts released their latest effort, ‘Submodalities’. It’s no ‘Miss You Like Crazy’ album. Not only is it evident in the music itself, but also in the lyrics. Dave, Scott, Clint and Bob touch on issues such as drug addiction in ‘Anti-Freeze & Aeroplanes’ and the teen anthem of ‘Just Another Phase’.

If you actually spin the CD, you’ll realize that this group has grown a lot over the past 3 years, and naturally, they’ve changed. “When you’ve got four guys, who are very different, collaborating together – you get a very diverse record,” Bob explains. While initially facing flak for their age (or lack thereof), the Moffatts are showing critics that they can really play – and this album backs them up. Not only are they keeping the ‘Moffatt’ sound, but they’ve started to experiment with their instruments and their voices. You have the tight harmonies, but also the yodelling-kinda noises Scott tends to emit – which helps give the songs a different flavour, like the trippiness of ‘Life On Mars’. They are so in sync not only on the album, but also when playing live. 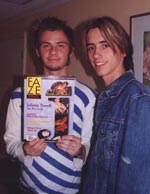 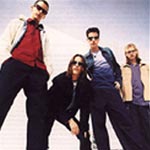 This album is far from the stereotypical boy band image they’re successfully shedding. Although their fan base predominantly consists of teenage girls – this new sound is attracting more males and adults. As Clint puts it, “It’s pretty amazing to have thousands of screaming girls when you go onstage, but we would like to broaden our fan base.”

They’re also taking more controlof their careers (the guys wrote or co-wrote 10 out of the 12 tracks on Submodalities compared to 4 out of the 13 on Chapter 1: A New Beginning). Not only have the Moffatts started experimenting with their potential, they’re also successfully bridging the possible market gap that this risk could have posed. 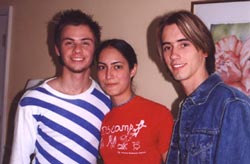 Faze Writer Maya with two of her subjects

They are very aware that some fans may have been disappointed by the new direction of their music but they realized that this was a natural progression. They felt that it’s something that everyone goes through; the process of change is inevitable, “sure, we might have started with country music then moved to a more pop sound and now we’re really into rock. That’s not to say that country music is bad, it’s just that we wanted to move on,” says Scott. Bob feels the same and adds that they’re like everyone else, “our likes and dislikes have changed, what we’re interested in is always evolving, but everybody goes through that. It’s the same with friends, you lose some along the way but you’re always making new ones.” 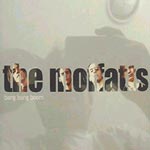 They knowingly acknowledge that if they weren’t open to self assessment and subsequent growth, they wouldn’t be where they are now – they would never have left the safety of their friends and fans in the country music world if they weren’t willing to be true to themselves. And it’s paid off.

While Submodalities is the indicator as to where they are now, there’s no telling where they’re headed. “It’s a snapshot of where the band was at that time. Between Chapter 1 and Submodalities, people didn’t see the progress we were making between the records,” says Clint, “we could become a formula band and put out stuff that you know has worked previous times, but we’re going to be a band that believes in what we do,” he explains. “We wanted to do something that we could put in a CD player in 5 years and be proud of,” Scott adds. They’re experts at transcending time, and when asked about moving forward, Bob says, “I think it’s all about how you present yourself. We carry ourselves differently and you have to if you want to be taken seriously; if you want to shed the ‘kid’ image, you can’t act like a kid anymore.”

After speaking to the brothers Moffatt, you can really sense their distinct personalities and the dynamics between them. With such different personalities, you wonder how they manage not breaking into fisticuffs at the drop of a hat. Luckily, they don’t pound each other – but rather discuss the possible glitches (which, for example, occurred when it came time to selecting songs to go on Submodalities). “All four of us are so opinionated, you know, sitting there and seeing a song that is my personal favourite not making the album feels like it’s going to kill me, but we work through it,” Clint shrugs.

This is yet another indication of their maturity and understanding of the process of growth through resolution. Each one of them has an equal voice in the band and is given the opportunity to use it. The discussion is open and democratic. Personal feelings and opinions are considered and respected. “It’s good to have those arguments, those conflicts, because it makes the band stronger. It’s taken time, but we now have more of an appreciation of what each of us wants in the band and what we can offer as individuals,” Scott says. 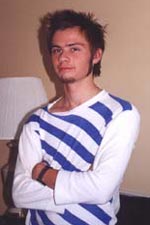 The Moffatts’ dad Frank has seen it all. “As a parent, what I’m most excited about is that they’ve become very independent and their individual personalities are starting to find their own mark.” To the casual spectator, this whole “evolution” may be unbelievably sudden – although it’s actually taken 3 years.

They’ve come a long way from singing on piers in cowboy boots. The realm of personal change has so many extremities; it’s just how you react that makes the difference. Change is essential and how you perceive yourself and others is what change is all about. “I have the tendency to not care what people think about me and I just do what I want,” Scott grins. “If people don’t appreciate you for who you are, just keep on doing what you wanna do. You don’t have to care about what other people think as long as you know you’re doing what’s right for you,” advises Dave.

What’s the Moffatts plan to continue their emerging success? Keep the music evolving as they themselves push their boundaries and challenge themselves to grow. 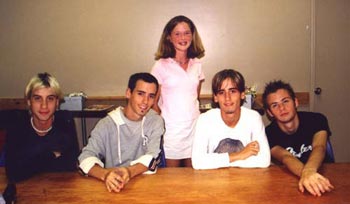 Our contest winner Megan hung out with the Moffatts for an hour backstage in London at their last show (ever?) 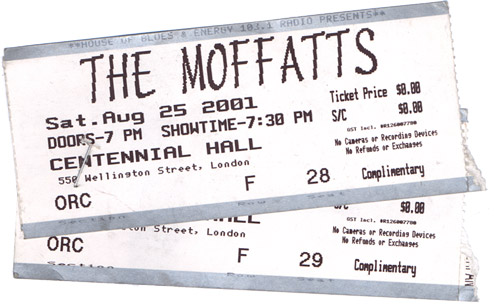