(rescued from the Faze 2000 archives)

The big record companies have banded together to fight a war. Today’s enemy is Napster, the wildly popular (and free) software that allows users to share computer files, mainly songs in MP3 format.

Now, I easily understand their point of view: huge profits come from having control of the product and its distribution. The arrival of MP3s, song files easily shared over the Internet, threatens that control. And Napster is making sharing easier than ever before. But there is zero chance for the recording industry to reverse the current technology. If they’re very lucky, they may be able to jump aboard and somehow try to scrape a little money out of it.

But making money will be tough. Napster, for example, gives away their software for free, lets anonymous users connect to its servers for free and get songs through its system for free. WinAmp, MP3 playing software, which has been the driving force in popularising the MP3 format, is also completely free. So are all the other significant MP3 sites and programs. I would not want to be a long-term investor in a company that makes and sells CDs for a living: the road is all downhill from a profit point of view. 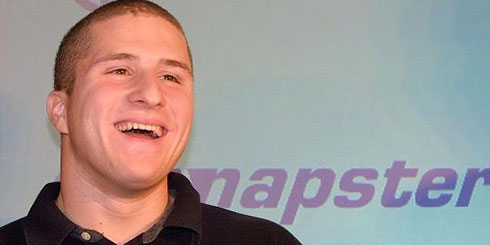 The recording industry is hoping to shut down Napster, urged by their lawyers, but in the end Napster is not the real issue. Napster, software originally created by a 19-year old college student, Shawn Fanning, was taken over by Silicon Valley investors looking to make big bucks. But the company makes no money and has nothing for the record companies to sue for. And what happens if Napster is simply shut down?

Nothing. Well, OK, Napster’s 20 million users will be slightly inconvenienced but within a month they will all be back sharing songs using the next popular, free MP3 swapping software. Even now, for example, CNET.com’s website boasts “Don’t let Napster’s legal troubles stop you from sharing your files online. Check out this handy collection of 25 audio search utilities and file-sharing programs.” All free, of course. And those programs will not have a physical company to sue, or shut down. If the record companies have any sense they will try to link up somehow with Napster and jointly try to figure out a way to make some money online. This could be their only chance because after Napster the file swapping phenomenon will become untouchable. 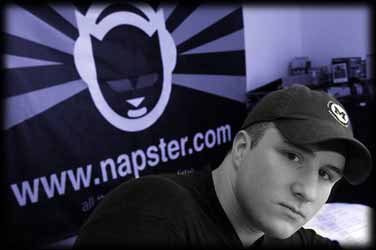 Many argue that the record companies are to blame for their current misfortunes. I disagree. Instead, they are simply caught up in the online revolution that is changing business everywhere. They are the middlemen between musician and listener. And middlemen everywhere are being rendered obsolete as the Internet takes over. Travel agents feel it, why book a flight them through them when you can buy it cheaper, and quicker on the Net. Good old-fashioned retail stores are feeling it as more customers are choosing to order over the Net directly from the manufacturer.

Even worse, for the record industry, their core product is simply data, digital sound data, with no physical form. With a car or a plane trip, everyone needs to buy their own, they can’t make an exact duplicate and give it to 20, or 20 million of their friends. Yes, recording companies produce CDs, which can be copied using a $200 CD-burner. But even CDs will be obsolete, in a few years, as digital music will be played on devices that store sound data in onboard hard drives. Already, portable MP3 players are competing with the Walkman. The record companies have to embrace the new technology or be erased by it.

In the USA, the recording industry is looking to the courts and the government to come to their rescue. In this battle, however, U.S. congress may choose to avoid any moves that could stifle the Internet industry that has driven the economy to new heights and seems to be the future. Congress also may look at the fact that most of the major record labels are foreign owned – Japan’s Sony, Germany’s BMG, Canada’s Universal, Britain’s EMI – and decide to side with the American-dominated Internet industry. The lone major American label, Warner Bros., is owned by AOL-Time Warner. AOL-Time Warner ironically also owns Nullsoft, creators of WinAmp, as well as Gnutella, the hot program ready to replace Napster if needed. 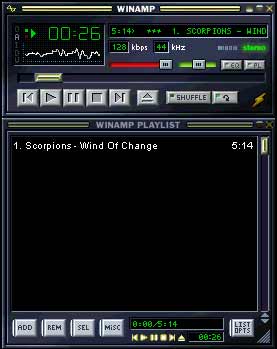 The recording industry’s fight against Napster shows its collective desperation as they grasp for straws. Individually, though, the companies are fighting to somehow convert to the new digital age. A few may find some new role to play, others will not. Any attempt to develop a fancy security code on new music will fail, as hackers will break the code overnight. The masses have become used to getting something for free online and they will need to be convinced of some new benefits before they will pay for song files online. One example, of added benefit, while still in CD format, would be the latest Serial Joe CD, which when placed in one’s computer, plays a few of the Newmarket, Ont. band’s videos.

Are the masses thieving pirates, as the recording companies consider their digitally savvy customers? Yes, by current copyright law, file traders are breaking the rules or least severely stretching them. At the moment, this really is not in doubt. But the courts will be making some interesting decisions on these laws in the months and years to come.

Years ago the recording industry tried to fight recordable cassettes because of the threat of pirate copying of records and radio played songs. They lost the fight because it was ruled that chasing millions of small cassette pirates was unfeasible.

It seems likely that MP3 users will be even more impossible to hunt down one by one.

Finally, will live in something called a democracy, and laws, in theory, evolve toward the wishes of the majority. If the law states that hats cannot be worn in the malls but 95% of the crowd insists on wearing hats when shopping, the hat law will change. If the “people” overwhelmingly feel that Internet song trading is acceptable then laws will eventually move to affirm that, whether the record companies agree or not.

So, the record companies are destined to get squeezed. What about the artists? I consider the artist’s point of view very seriously: I am a budding musician myself. How will I ever hope to make a living writing and playing my music in this new age? Well, to be honest, for 99% of the artists out in the real world, without mega-million dollar deals, not much changes.

If anything, today’s technology lets a brilliant but unsigned musician (in some remote corner of the world) produce a professional sounding album for a tiny fraction of what the companies would spend. Our brilliant musician then tries to promote himself on the Internet for a tiny fraction of what the companies spend to promote their “artists/products.” Maybe our artist catches enough of the billions of ears on the Web to sell some mail order CDs or paid downloads. Maybe he creates enough buzz to play a few profitable shows or tours. Maybe MTV or radios will pay to play his songs. Maybe Mountain Dew pays for a song in a commercial, and then sponsors a world tour. Money that would have gone to record executives, company expenses and record company shareholders now goes entirely to the artist. 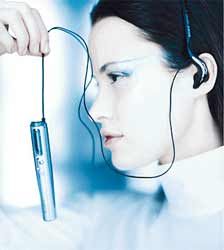 Tech companies are ready to cash in big on MP3 hardware.

In the current record company regime, very few artists are able to quit their day jobs. It will be tough for big record label acts, but perhaps better for the much larger majority of less trendy musicians. And maybe the “music” will be even more exciting and diverse than ever before.

Music and musicians have always existed and will never disappear. Records, record companies and record company profits, on the other hand, did not exist a hundred years ago. As records and CDs dissolve into new cyberforms the companies and their profits will cease to exist in their current forms. 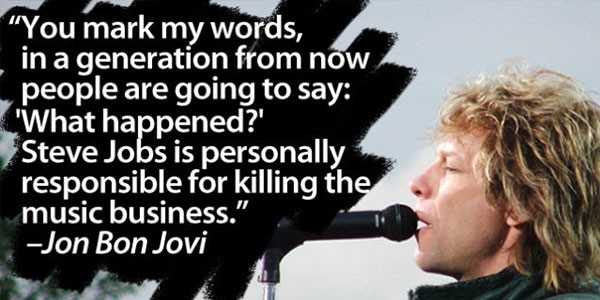 “You mark my words, in a generation from now people are going to say: ‘What happened?’ Steve Jobs is personally responsible for killing the music business.” -Jon Bon Jovi

(rescued from the Faze 2000 archives)