You can win two tickets to Family’s Big Ticket Summer concert in Toronto! 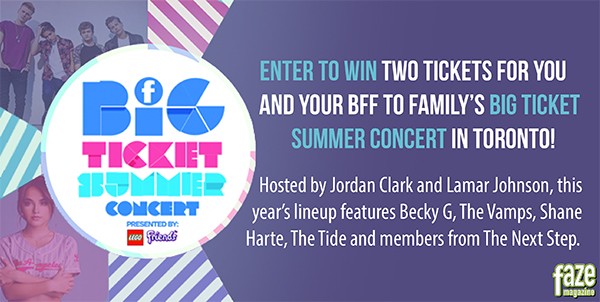 Hosted by Lamar Johnson and Jordan Clark, fans of The Next Step will get to see some of their favourite dancers performing live on stage. Plus, Shane Harte, a singer, songwriter and actor from Brampton, Ontario, who guest starred The Next Step, will also be taking the stage to perform his hit song “Let You Know.”

The Big Ticket Summer is also showcasing The Tide, a guitar band from Los Angeles, California who are signed to The Vamps’ new record label. Speaking on The Vamps… The Vamps are ready to bring down the house at this year’s Big Ticket Summer Concert. Most recently, the multi-talented group collaborated with Canadian breakout artist Shawn Mendes on a revival of “Oh Cecilia” and their high-energy performance will electrify the stage. This year’s concert also marks the Canadian debut for singer/songwriter Becky G, whose hit single “Shower” became her first entry on the Billboard Hot 100 chart, peaking at #16. With multiple hits burning up Top 40 charts worldwide, her Latin pop flare will ensure the crowd “Can’t Stop Dancin’.”

Share this contest with your friends using the hashtag #BigTicketSummer

For more information on performers and tickets, check out Family.ca.

CONTEST RULES: No purchase necessary. Contest entry deadline is Friday, August 21, 2015, midnight EST. Number of entries limited to one entry per person/email address per hour. Competition open to all legal residents of Canada. Entrants must be at least 13 years of age (or older if required by the laws of the province or state in which you reside.) Ineligible entrants include all employees of Faze Media Group companies, Family Channel, their families, agents or anyone professionally associated with the administration of this promotion. Completed entries will be entered into a random draw for two (2) prize winners. Chances of winning depend upon the total number of entries. Prize winners will be notified within 2 business days of closing date of the contest. Any unclaimed prizes will be forfeited after one week of the closing date. There is no substitution available and no cash alternative. The prize for the competition has a suggested retail value of $120. Items may not be exactly as shown or described.