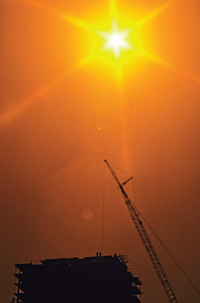 GLOBAL WARMING – Is It Our Fault?

While it’s clear the world has been getting warmer, there remains doubt about the cause: human pollution or regular long-term climate patterns. A joint-statement by the national science academies of eleven of the biggest polluters (including U.S., China, Russia and Canada) announced that warming is most likely man-made. This puts pressure on the Bush government which has blocked any global plans to reduce greenhouse gases. Some Canadians and Russians feel that the world’s two coldest countries could use some warming, but the price could include loss of native animal/plant species, violent weather and more tropical diseases.

Two and a half years ago the shuttle Columbia tragically exploded in mid-air, killing all seven astronauts on board. The shuttle program was immediately grounded while safety improvements were made. After several delays, this summer the space shuttles will start flying again. The first re-launch will be made by Discovery, with the other two remaining shuttles, Atlantis and Endeavour, both expected to be back in service by next year. Space shuttles have been flying into orbit since 1981; this summer’s launch will be the 114th mission. As well as the loss of Columbia in 2003, an earlier shuttle, Challenger, exploded soon after takeoff in 1986.

British football club, Manchester United, has been taken over by American sports tycoon Malcolm Glazer amid protests by the team’s fans, including American flagburning incidents at matches this year. Manchester United (Beckham’s former team) is the most profitable and perhaps the most famous sports team in the world and many supporters suspect the American billionaire’s interest in the team is purely financial. They fear price hikes for tickets and parking spaces among other things. Glazer is best known for buying the NFL’s Tampa Bay Buccaneers in 1995 and turning them into Super Bowl champs in 2003.

PORTUGAL & SPAIN – No Rain on the Plain 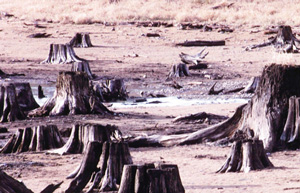 While dry conditions this year are leading to water-rationing in many countries fromAustralia to Britain, nobody is feeling as dehydrated as Portugal and Spain. After an unusually dry winter, this is the worst drought in Portugal in 300 years Tree Stumps andSpain is drier than it’s been in 60 years. Public pools and fountains are empty, while river water volumes are down around 35%. Harvests are looking dismal this year and to make matters worse forest fires are a constant threat throughout the summer. The heavy summer tourist season with its 60 million visitors will put even greater strain on the shrinking water supplies. 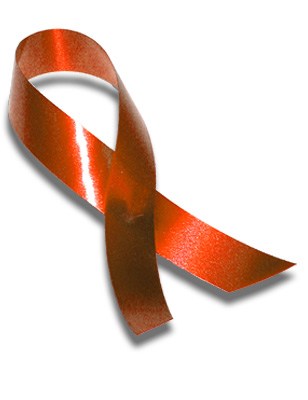 HIV/AIDS remains the curse of our generation, with 40 million people infected worldwide. Africa is especially being devastated by the disease and millions of children here are facing the horrors and hardship daily as AIDS kills off parents, family, friends and teachers at stunning rates. Of 500,000 children killed by AIDS last year, 9 in 10 deaths occurred in sub-Sahara Africa. Vaccine and a cure have still not been found and drug treatments which improve victims chances of living longer are still expensive and not always effective. The world will need to pull together over the coming years to beat this plague.

Bringing back memories of China’s Tiananmen Square, the president/dictator of this central Asian country ordered troops to open fire on protestors in the town of Andijan, killing hundreds of unarmed men, women and children. Thousands more fled the region in fear of more violence. President Islam Karimov noted the protestors included Islamic “extremists”, a common justification these days when governments violently crack down on restless minority or ethnic groups. The dictator is a key U.S. strategic partner (military and oil industry). Karimov has rejected U.N. calls for an international investigation into the massacre. 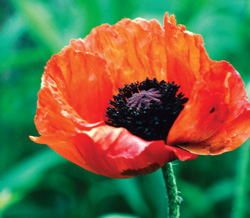 Actually, there are two wars being fought here: one against the former rulers, the ultra-religious Taliban, and another war against poppy flowers and the drugs they produce, opium and heroin. Here, as in Iraq, the Americans launched a bombing campaign, invaded the country, toppled the government and arranged elections to elect a new one. Unfortunately, here, as in Iraq, there is a growing military campaign to fight the Americans and their supporters and the bodies are piling up on both sides. To make matters worse, opium production, virtually shut down under Taliban rule, is now hitting record production levels according to the U.N. 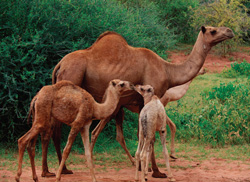 CamelsThousands of wild camels in the Australian Outback will be shot and killed from helicopters over the next six months. Ranchers argue that the growing population is competing with their cattle herds for water and grass. Camels were first introduced into the Australian desert in the 1880s but were set free with the arrival of trains and trucks. The wild population has grown steadily since. Animal welfare groups have condemned the “bloodbath” as excessively cruel as it is difficult to instantly and humanely kill moving animals from the air. The Australian government has carried out similar culls of wild horses and goats.