Times have changed since Madalyn Murray O’Hair fought to get Bible readings and group prayer banned from public schools in 1963.

Yet today, there are still issues teenagers face on a regular basis that may compromise their personal ethics. There has been a rise in students speaking out against animal dissection in biology class, and the way sex education should be taught remains a hot topic.

Every year, as part of their biology curriculum, millions of high school students dissect animals, a practice that was introduced into the educational system in the 1920’s. “Dissection—particularly at a high school level—is outdated,” says Lesley Fox, Humane Education Program Director from the Vancouver Humane Society. “While the majority of high school students will dissect at least one animal in school,” she says, “very few of them will enter a career where the dissection experience is even remotely related.”

While some students do not have a problem dissecting animals, others are uncomfortable about or opposed to the process—and often feel pressured into doing it—and alternatives aren’t usually made known. “Many high schools have alternatives to dissection,” says Fox. “The problem, however, is these schools rarely advertise that fact to students and they don’t make it easy or comfortable for students to opt out”.

One alternative:
Purchase a dissection simulation CD-ROM that allows you to attempt the exercise virtually until you get it right. It’s something PETA would probably approve of, and it’s definitely more cost-efficient (think of the millions of animals who are purchased for the purpose of dissection).

Faze Survey…We asked 125 teens:
Should schools have a standardized curriculum? 60 said YES and 65 said NO. Hmmm.

According to the school curriculum, students need to learn about sex. But what is it they’re learning and is it being communicated in the most effective manner? “I remember watching a video in grade eight about a woman’s body,” recalls Lianne, now 18. “That was it, though. By the time I got to high school and really thought about sex, there wasn’t a lot of education offered.”

Many teenage students like Lianne are given very little sex education in junior high. “It was a private school,” she continues, “so I guess in the back of my teacher’s mind there was always the lingering thought of keeping it ‘clean.’ A lot of parents get mad because sex at a young age goes against their religious beliefs. They seem to think that if it’s talked about their kids will do it. Yet so many of their kids already are, and they have no idea how to be prepared for it.”

Some high schools have a different approach to sex education. They offer an assignment where the student takes home a battery-operated “lifelike” plastic baby that requires a key in its back when it cries. “The point of it was so we would learn the repercussions of getting pregnant at our age,” says Michelle, 17. “Except the teacher never told us how we might get to that point. They just said ‘this baby is going to cry in the middle of the night like it’s real, and if you try to take the battery out you’ll fail.’ Except this baby wasn’t real: it wouldn’t laugh or smile like a real baby.”

Jordan, 17, was also made to behave as if he had a baby. “We were told to make a budget as if we had a child. I learned it’s definitely expensive to have a baby, but I think schools should also be honest in every way: What a baby does to your body, what it does to the person emotionally, how the couple will manage a baby and school.

I don’t think scare tactics work, I think honest facts do. It’s better to be prepared for the changes.”

We dug up some honest facts:
23% of secondary school sex education teachers teach abstinence as the only way of preventing pregnancy and STD’s.

More than 200,000 young women have a child before their 18th birthday.

70% of pregnant teens go on to finish high school. 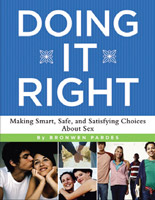 Brush up on sex ed outside the classroom. Doing It Right: Making Smart, Safe, and Satisfying Choices About Sex by Bronwen Pardes (Simon & Schuster) is a no-fuss read that gets the gold star for answering the basics and the a-bit-more-complicateds.