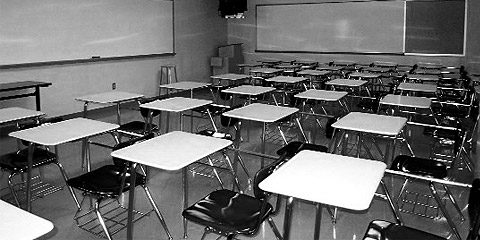 Picture a society where learning can happen at any time, in any place and can be completed without ever going to class. This is the essence of online education, and internet technology now exists to support such a system.

By the way, if the words “web, cyberspace, net or wired”, mean nothing to you, then you better get yourself one of those books entitled, The Idiot’s Guide to Computers. The virtual classroom is here. Worldwide, more than 17,000 courses are now online, 2,700 courses from Canadian schools.

According to International Data Corp., about 2.2 million people were enrolled in online courses in 2002, in the United States alone. The Canadian education system should have seen similar levels of enrollment in online education. If you are interested in English, Civil Engineering, Dental Hygiene or Forestry, then try heading west to the University of British Columbia (UBC) and click yourself a degree. Well, maybe it’s not that easy, but you would be on the right track. UBC offers these courses over the web. They are second, third and fourth year courses, which mean you would still have to attend at least one year of traditional classes.

The flexibility of studying at your own pace, and the money you save with online courses, are two of the main attractions. An executive MBA degree from Queen’s University in Kingston, Ontario costs $40,000. In Alberta, Athabasca University’s online MBA program is more reasonable at $25,000. 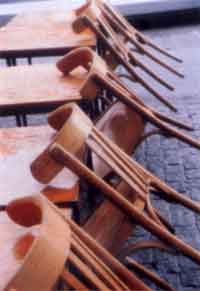 The web is full of sites for you to visit, e.g. The Virtual Schoolhouse where you can check out a classroom, the principal’s office, the library, teacher’s lounge, art room or you can even choose to take a field trip. Or, if you want to get a little more specific, you can visit Virclass Corporation and take an online course in Introductory Physics.

The web is a powerful educational tool. Scattered throughout cyberspace, you can now find examples of governments, educators, students, and researchers, experimenting with, and using the web as a way to teach and to empower students with newfound creative ability. Every public library and school in Canada, a total of 18,263, is now wired into the net. The federal government in Ottawa, the provinces, school boards and corporations funded the SchoolNet program where the plan was to connect each of the country’s 250,000 elementary and secondary classrooms to the Internet by 2001.

In some areas, online courses are being used to relieve overcrowding. Is the web simply being used to reduce overcrowding or is it creating a generation of loners and social misfits as feared by some parents? Some feel that virtual classrooms will isolate students from each other, which will result in problems developing interpersonal relationships and that these skills are much more important than computer skills. Should teachers teach kids how to behave in society, how to respect others and how to co-operate, or should kids have already learned this from their parents? No one is saying that social skills aren’t important, however, virtual classrooms are far more than just computer skills. Some strongly believe that education can be taught via the web and social skills can be gained from joining sports teams, summer camps, or just by hanging out! After all, if you’re on a hockey or baseball team you’re sure to pick up some lessons on respect and cooperation.

Others argue that this virtual classroom may place pressure on students: to become computer literate or be left behind in life. Is this undue pressure or reality? Maybe being left behind in life is a little dramatic, but the reality is that the computer age is here. Whether you want to pay for your new jeans with your debit card, or check to see if the library has the book you want, you’re going to need some computer skills.

The development of flexible, inquiring minds has rarely been the main concern in the design of educational systems. After all, if you have over thirty inquiring minds and only one teacher, flexibility could be a problem. It seems that developing students’ proper social behaviour has always exceeded the concern to develop students’ creativity. Computer technology can make individualized attention a real possibility. At the Institute for the Learning Sciences, systems are being developed to allow people to try out things in simulated worlds, fly their own ship to the moon, or direct their own newscast. This technology will allow for the individual creative growth in students. 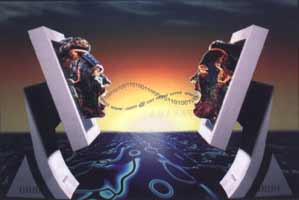 Uh, computers talking? or fighting over a necklace?

Despite all of the efforts to improve schools, some parents believe that our schools are not fit for educating their children. This frustration has led to a surge in the movement known as homeschooling. Homeschooled families educate their children as they see fit, either basing their education on curriculum available for purchase or developing their own curriculum. Ed Web is a website that explores technology and school reform and has a lot to say about homeschooling. The author Andy Carvin says that, “With the recent growth of the Internet, even more families have become attracted to homeschooling.” Research suggests that homeschooled students outperform their public school age-mates. According to a survey of test scores by the National Center for Home Education in the U.S., homeschooled students outperformed public school students by an average of 30 to 37 percentile points in math and reading. The survey also noted that the income and education level of their parents did not effect the success of their children.

The web will provide amazing opportunities for the education of our society. Anyone with a computer and internet access can peruse effectively unlimited amounts of knowledge and programs, designed to help them learn and understand. The teachers and parents involved with these programs will be given the job of making sure that students lead well-balanced lives that combine online education and positive social interaction with their friends and neighbours. Imagine that your recreation room has now become your classroom, and your parents seem to be doing as much homework as you are! So, be prepared as the virtual classroom may find its way to a computer screen near you!