Editor’s Note:
On Thursday, January 19, 2012, Sarah passed away after being in a coma for nine days, succumbing to her extensive injuries that resulted from a fall during training on a halfpipe in Utah. Our hearts go out to her family, friends and teammates who are dealing with this shocking news.

It’s been over a year since Faze chatted with freeskier Sarah Burke, but we always considered ourselves very lucky to have heard her inspiring story first-hand. Here`s hoping that the story lives on in those that she touched with her bravery, determination and passion for life. 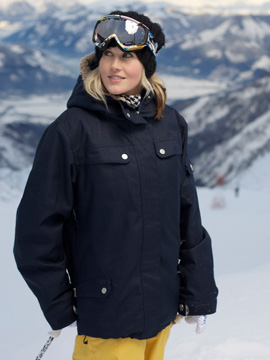 From the top of the half-pipe, freestyle skier Sarah Burke can see thousands of fans cheering for her on the sidelines. Before gliding down the horseshoe-arced slope, Sarah pictures her run in her head, the pace of her heart quickening.

At 28, Sarah is one of the best freeskiers in the world, winning top medals at nearly every major competition, including the Winter X Games three years in a row.

The pressure is on, but Sarah says she wouldn’t have it any other way.
“Being up at the top of an X Games final, when you have a thousand people screaming all the way down the sides—people that want your autograph and kids that are smiling—when you pull up to that, it’s easily worth it.”

The objective of freeskiing, or new-school skiing, is to achieve maximum airtime while completing as many tricks as possible. The halfpipe is shaped like a U and allows extreme skiers to gain momentum on each downturn and maximize tricks like jumps, backflips and corkscrews when they are propelled in the air. The sport has reinvigorated skiing, focusing more on individual style and impressive jumps. Freestyle skiing is more acrobatic and technical than other forms of skiing, like downhill racing.

As the world’s first female competitive freeskier, Sarah has seen the extreme sport grow since the ‘90s, particularly when it comes to gender. Sarah was often turned away from competitions or had to compete against male athletes because there were so few opportunities for females.

“It’s fun to compete with the guys,” she says over the phone from her home in Whistler B.C. “[But] there were definitely times when it was frustrating and I was tired of having to fight with the organizers or beg for a spot to ski against the guys.”

Sarah has forged the path for female skiers by becoming part activist, demanding equal pay and as many opportunities as her male counterparts. “It was always a real battle in that aspect, but it’s come a long way and it’s only going to get better.”

The 28-year-old was born in Midland, Ontario and started skiing with her family when she was five. She fell in love with the sport and skied with her friends at the local resort every day after school.

Sarah realized she could turn her passion into a career when her sponsor signed her at 17. Since then, she’s traveled around the world to compete and even had the opportunity to design her own line of signature suits for Roxy.

Work/life balance isn’t difficult to manage for Sarah because freeskiing doesn’t feel like work to her. “It all blends in together because I’m doing something that I love,” she says. Having recently married another pro skier, Rory Bushfield, she says they both understand the demands of the job and can help each other achieve their goals.

Sarah’s advice for young freeskiiers who want to follow in her footsteps or even just try a new trick is to pursue it with all your heart. “It sounds a little cliché, but follow your dreams. If you’re scared to try a new trick, you have to start small and get bigger.”

Sarah’s personal dream is to attend the 2014 Winter Olympics in Russia. “I remember when I was really young and somebody asked me what I want to be when I grew up and I said I want to go to the Olympics,” she laughs.

Sarah was barred from competing in the 2010 Olympics because the International Olympic Committee hasn’t approved halfpipe skiing yet. However, it’s expected to officially be named an Olympic sport sometime next year, as the Ski Federation unanimously recommended the IOC approve it. “It’s always something that’s been a dream. I’ll do everything in my power to be there.”

Sarah is currently recovering from a back injury she received at the X Games slopestyle. Recovery was pegged for six months, as she had to undergo surgery; however, she plans to start skiing again in January.

“I love skiing and I have a motivation and a drive that I want to get back out there. You have to take it slow and the main thing is getting better,” she says.
You can’t always expect to land on your feet—like so many other things in life—but freeskiing is worth the injuries, she says.

“The most important thing to me is to make sure I’m having fun doing what I’m doing and when I’m not, I’ll move on to something else. I know how lucky I am and I’m so thankful.”