The beautiful island of Tobago, one of those special places in the Caribbean that remains relatively undiscovered. 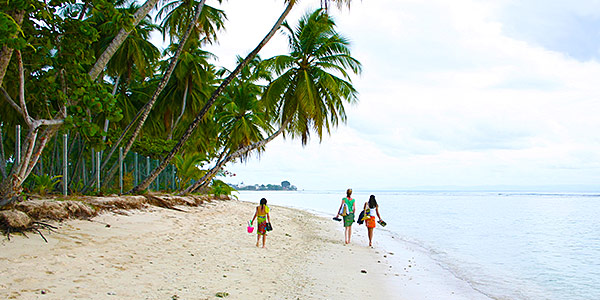 All photos by our own Jim White

Fierce battles raged between the French, Dutch, English and Spanish — with one encounter with the U.S. thrown in as well — all fighting for ownership of this small fish-shaped Caribbean island only 10km wide and 42km long. Since Christopher Columbus first came upon it in 1498, Tobago has changed hands 33 times! And for what? Read on and it becomes obvious. 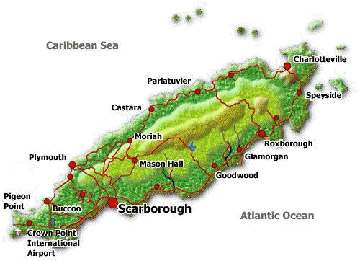 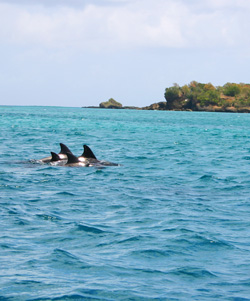 Below the water’s surface is one of the island’s not-so-secret treasures. After Jacques Cousteau declared it as one of the “most spectacular reefs in the world,” Tobago’s reefs have become a must-see wonder of the Caribbean.

A four-acre zone of shallow patch reef located on the Caribbean side of the island’s southern tip, Buccoo Reef is a natural aquarium of corals and technicolor tropical fish. Boats designed with glass bottoms are ideal for viewing the underwater world as you hover mere feet above gardens of pillar coral, finger coral and the infamous “fire coral” (which isn’t really a coral but looks like one, and is equipped with structures to deliver a painful sting). 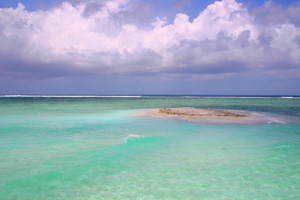 Snorkeling is the most popular way to get up-close and personal, however, if you’re willing to gear up to SCUBA dive you’ve got to hit another famous site named Kelleston Drain, near Speyside, where you’ll find an amazing brain coral colony that has been growing for centuries. This single colony is an awesome three metres high and over five metres wide, making it the largest single brain coral colony in the world! Next to the drain is another reef where you might be fortunate enough to catch a glimpse of some nurse sharks, barracudas, moray eels, dolphins or perhaps one of Tobago’s famous giant manta rays. 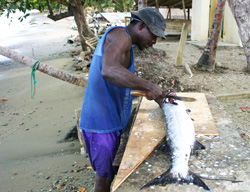 After a long afternoon of reef watching you must visit The Nylon Pool (named by Princess Margaret in 1962 after she commented that the water was as clear and sheer as her nylon stockings), where folklore says you’ll look five years younger if you swim in its warm, aquamarine water. An anomaly, it seems to exist in the middle of the ocean, and yet you can comfortably stand, as it’s only about four feet deep. 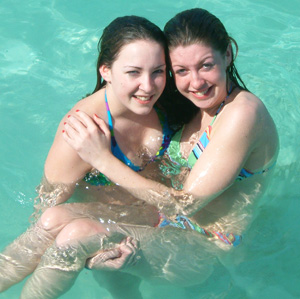 The waters of the Nylon Pool are said to have rejuvenating powers. 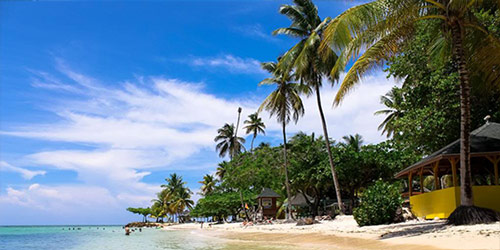 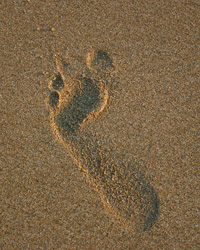 If you’re not interested in the tourist scene, or paying the $18TT ($4.50CAD) entrance fee (used to finance the upkeep of the beach), you can venture out to the many other picturesque sunspots that surround the island. There’s Store Bay where you can hang with the locals, or you can keep going until you find what you’re looking for, whether it’s diving, snorkeling, windsurfing or maybe a secluded spot where you won’t see another being for hours. If you plan your visit between March and June you might catch a glimpse of giant Leatherback turtles on the north shore beaches where they come to lay their eggs. 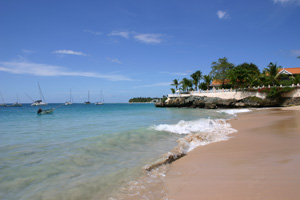 But if you’re into surfing, you’ve got to check out Mt. Irvine where there is a right break that ranges from waist high to double overhead and there’s almost always something to ride. You can also hire a fisherman to take you out to offshore reefs where you’ll find glassy lefts and rights if you head out early. And if you’re lucky you may run into some of the Quiksilver Pro Surfers who will oooh and aaah you with their wave supremacy (we did!) 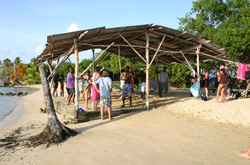 A popular lunch destination while visiting the reef is No Man’s Land where you’re treated to steel pan music and perhaps a few rounds of the limbo! 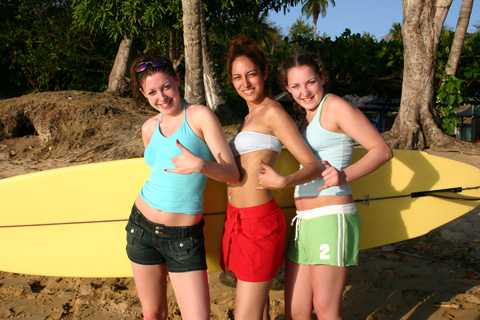 Surf lessons and board rentals for the day will run you about $70 CAD, although locals are happy to show you how it’s done.

BONUS!
Check out our Tobago beachwear photoshoot ! (featuring me, and the 3 hosts of GirlzTV /TeensDating that shot episodes while we had them down there) 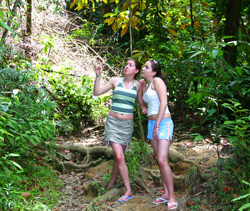 The small island of Tobago not only overflows with lush rainforests and greenery, but it is home to the oldest reserve in the Western Hemisphere. Despite the devastation caused by Hurricane Flora in 1963, the forests have replenished their growth, and today, Tobago’s rainforests are the primary fresh water source for the island, while providing well-protected homes for hundreds of birds, butterflies and exotic creatures like agoutis, armadillos, caimans and wild hogs. 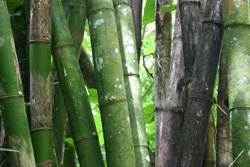 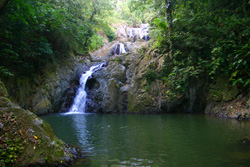 Rainy season in Tobago is from June to December, but the increase in water flow make sights like Argyle Waterfall, a 3-tier fall that stands 54 meters high, even more spectacular. To get to the falls you’ll have to trek along a scenic trail that winds past a cocoa field, at which point your guide will often voluntarily pluck a pod from an overhanging branch to offer you a taste of the sweet fruit that once drove the country’s economy. At the end of the hike you’re rewarded with an opportunity to continue your trek to the top of the falls for a breathtaking view of the scenery, or you can bathe in the cool pool of water at its base where you can pretend to be on the set of a shampoo commercial with the tumbling water rushing over your head and shoulders. 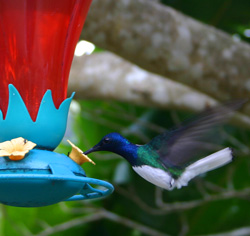 Eco-tourism is a developing industry, with resorts like the Cuffie River Nature Retreat, which is delicately tucked into the hills of the rain forest, where the founder and owner, Regina Sanchez is happy to explain how man can co-exist with nature while preserving and protecting her natural resources. 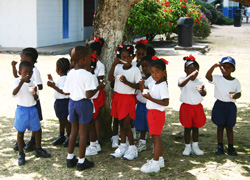 The attitude on the island is reflective of the casual pace of life. There is no hustle and bustle, or rigid scheduling for that matter, as everyone on the island is easygoing and relaxed. The locals are friendly and will often start conversations, so be prepared to answer questions about where you’re from and what you do. If you’ve chosen a local bed and breakfast for your accommodations, like Doris’ Guest House in Crown Point, you’ll often be included in family meals where the friendly owner, Jean, might excite your taste buds with Curry Chicken and Roti (a Pita-like bread) with sponge cake for dessert and perhaps some cold coconut water to wash it all down. The local food is a blend of Indian and Caribbean flavours, so zings of spice and zest fill every bite. And, you can’t leave the island without first trying the local favourites of Crab and Dumplings or Shark and Bake. 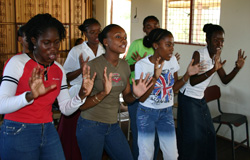 “Liming” (what they call hanging out or chilling) is the pastime of choice in Tobago. Talking about cricket (their national sport) makes the conversation much sweeter for Tobagonians. Liming on the beach or at local watering holes is where the scene is at.

For a truly authentic Tobagonian event, the goat (yes goat) races in Buccoo Village are a sight to see. Every Easter jockeys run behind their ‘rides’, encouraging them to pick up the pace. 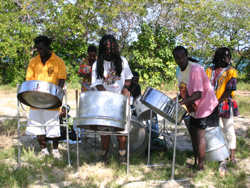 Steel pan bands, calypso and soca jams are the sounds of the island. Every February Tobago revels in elaborate costumes, pulsating sounds that make you want to ‘shake ya waist’, and festive abandon as it mirrors the famous Carnival of its larger sister island of Trinidad. 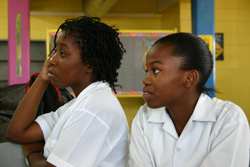 School means donning a uniform, which denotes what school you attend, and taking classes that are universal standards like math, geography and social studies. High school grads will often attend the well-respected University of the West Indies. 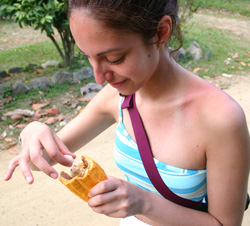 Thank you to Trinidad & Tobago’s national airline BWIA for direct flights from YYZ to POS. 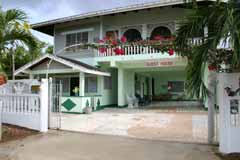 A special thanks to The Tobago House of Assembly, Joan Applewhite, Darren Friday and the rest of the team.

Congratulations to the lucky winners of the Faze Ultimate Island Adventure contest, affectionately known as ‘The Gonser Girls’. 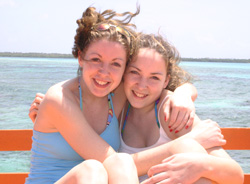 ALL PHOTOS BY OUR OWN JIM WHITE